Fashion Show by Sex Workers to Fight Against AIDS 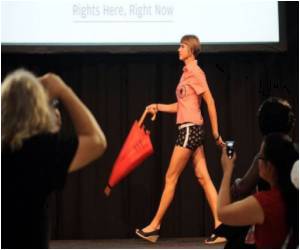 A fashion show to highlight discrimination was organized by sex workers at the World AIDS conference on Wednesday.

Strutting sexily -- or shyly -- down an improvised catwalk, sex workers and activists drew a large crowd at the Global Village where NGOs have set up booths for the week-long conference.

The collection featured skimpy yellow shorts with thin braces, a mini-skirt over red fishnet tights and frilly dresses, with condoms in bright packaging sticking out of bodices or pockets as a reminder of the theme.


It was designed by Daspu, a Brazilian label set up in 2005 by a former prostitute now involved in defending sex workers' rights and named from "das putas", which means "from the whores" in Portuguese.

For prostitutes, "AIDS prevention is an instrument for working," Friederike Strack of Davida, an association working Daspu in Brazil, told AFP.

The prevalence of HIV among this group is significantly higher than in the rest of the population but criminalisation of sex workers meant access to information and treatment was limited in many countries, Strack said.

"It's important that the sex professionnals, the sex workers, know how to use condoms, and they are the best to make HIV prevention: they have contact with the clients," said Strack.

"Visibility of our population is very important to get less discrimination, violence and negative attitude against our group," added Camille, a transgender sex worker and model for the day.

Diaphragmatic Hernia Calculate Ideal Weight for Infants Nutam (400mg) (Piracetam) Drug Side Effects Calculator Post-Nasal Drip Drug - Food Interactions Blood Pressure Calculator Find a Hospital Selfie Addiction Calculator The Essence of Yoga
This site uses cookies to deliver our services. By using our site, you acknowledge that you have read and understand our Cookie Policy, Privacy Policy, and our Terms of Use