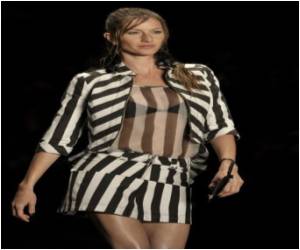 Italy's fashion giants embraced green themes and eco-chic at the men's shows in Milan this week, laying grass on walkways and wrapping models in eco-friendly fabrics and plant and animal motifs.

Setting the tone, Dolce & Gabbana titled its show "Luncheon on the Grass" after Manet's masterpiece and had birds chirping as models strolled down a grassy catwalk, carrying leather bags stuffed with vegetables and baguettes.

A Boom in Meghalaya's Fashion Industry

More numbers of fashion houses have led to a boom in Meghalaya's fashion industry.
Advertisement

Flowers, shades of green and string-soled shoes were ubiquitous, as were checkered patterns in red, blue or green reminiscent of the 1950s.


Etro too went for a lawn runway, with models donning light cotton, soy and nylon fabrics stamped in Indian patterns and Celtic embroideries. Earthly colours dominated, with greens and khakis and plant prints that reeked of the Amazon.

It is Fashion Now in Bollywood to be Slim

Bollywood actresses are slimming down, as an increasing vogue for showing bare flesh on screen and Western ideas about body size and beauty take hold in India's big cities.
Advertisement
Gucci went a step further, throwing out jet-set hunter lookalikes dressed in leather and snakeskin like their prey with colours in natural blues, grays and earth hues.

Frida Giannini, the house designer, rolled up soy and mohair sleeves up to the arm and sent them out hauling large bags in washed-down calfskin for a vintage look, with details weaved and laced in leather.

Under safari jackets and short trench coats, V-necked T-shirts in soy hung atop slim pants slightly pleated at the hip. Instead of ties Gucci went for soy scarves in flower patters and necklaces in coral or horn

Ermenegildo Zegna, celebrating its 100th anniversary this year, stuck to its classical style but toyed with details: a yoke of leather on shirt collars, a small foulard around the neck and Pete Doherty-style hats, all in sober shades of camel, light blue and grey.

Bermuda-suits were all the rage as Zegna threw a hint of Indochina on the runway. Jackets were short and waisted high, bermuda shorts at times turned into silk boxers. A whiter-than-white suit was donned over a Mao collar shirt.

Contrasting with the cheery eco-chic, a note of sadness hung over the shows following Friday's apparent suicide of iconic Burberry model Tom Nicon, a 22-year-old Frenchman who fell out of a fourth floor window in Milan.

Nicon had worked for most of the big brands, including Versace, Armani, Louis Vuitton, Kenzo and Hugo Boss.

His death was the latest in a string of tragedies on the fashion scene. Last November South Korean model Daul Kim was found hanged in Paris at the age of 20 and in April 24-year-old Ambrose Olsen, 24, was found dead in New York.