Family Displacement Could Traumatize Children Most 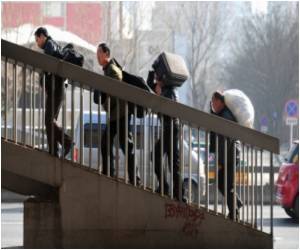 Displacement of a family, forced or voluntary, could affect the children badly, leaving them vulnerable to psychotic disorders such as schizophrenia.

The study, conducted by investigators at Columbia University's Mailman School of Public Health and the Parnassia Psychiatric Institute, The Hague, was published online in the December issue of the American Journal of Psychiatry.


"Our findings are consistent with the hypothesis that early life is an important risk period for psychotic disorders. They join the growing body of literature suggesting that adverse social experiences in early life, such as childhood trauma or parental separation raise the risks," said Ezra Susser, MD, DrPH, senior author and director of the Imprints Center for Genetic and Environmental Life Course Studies at the Mailman School of Public Health and the New York State Psychiatric Institute.
Advertisement
Researchers focused on the four largest immigrant groups in the Dutch city of The Hague-immigrants from Surinam, the Netherlands Antilles, Turkey, and Morocco. They compared the incidence of psychotic disorders among immigrants who migrated at various ages to the incidence among second-generation citizens and among Dutch citizens. Second-generation citizens (Dutch-born citizens with at least one foreign-born parent) were included to determine if migration itself contributed to the risk or if the long-term experience of being an ethnic minority was the more relevant factor.

Researchers sought to identify and diagnose every citizen of The Hague, ages 15-54, who contacted a physician over a 7-year period from 1997 to 2005 for a possible psychotic disorder. All diagnoses were confirmed by two psychiatrists. Patients diagnosed with any form of psychotic disorder were included in the analysis and were classified according to country of birth and country of parents' birth. In total, 273 immigrants, 119 second-generation citizens, and 226 Dutch citizens were diagnosed as having a psychotic disorder.

"Compared with the risk of psychotic disorders among Dutch citizens, the risk among immigrants was most significantly elevated among non-Western immigrants who migrated between the ages of 0 and 4 years," observed Dr. Susser. "We also found that the risk gradually decreased among those who migrated at older ages and this was the case among male and female immigrants and among all the immigrant groups in this large study."

Researchers allow that there are many possible reasons for the increased risk. The stress of minority ethnic status appears to contribute. The study found, for example, that second-generation immigrants have higher rates of psychotic disorders than native Dutch. Previous studies also suggest that the social changes associated with cultural and geographic dislocation may be an important factor. Other factors might include vitamin D deficiencies that are common among immigrants.

"This study also goes a long way toward ruling out 'selective migration' as an explanation for the increased rates of psychosis among immigrants to The Hague. Young children are unlikely to influence their parents' decision to migrate," noted lead author Dr. Wim Veling.

Once the reasons for the increased risk of psychosis are better established and understood, it might be possible to mitigate them, the authors suggest. "It might be useful," they write, "to develop interventions aimed at social empowerment and identity development."