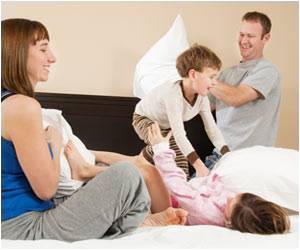 A new study suggests that getting the family together for dinners is one way to keep the communication channels open between parents and teenage children.

The results show that while parent-child communication generally declines as kids go through middle school, eating meals together can help protect against this conversation dip.

Busy Lifestyles Making Traditional Family Dinners a Thing of the Past

A new study has found that the fast-paced modern lifestyle has taken its toll on family gatherings, especially the traditional family dinner.
Advertisement


"Even if they're less likely to have meals with the family as they go into high school, if they're having them when they're younger, it's still a point of connection and it's a good thing and can have a lasting impact," Live Science quoted study researcher Jayne Fulkerson, a professor at the University of Minnesota School of Nursing, as saying.

Most Oz Family Dinners End Up in Rifts

A survey of Aussie mothers has revealed that over 40 percent of sit-down meals end in arguments, acrimony and tears.
Advertisement
The results are based on surveys of nearly 5,000 middle school students in Chicago public schools. Participants were surveyed at the beginning and end of sixth grade and again at the end of seventh and eighth grade.

Subjects were asked how frequently they ate dinner with their parents (never, hardly even, sometimes, a lot or all the time.). They were also asked how often their parents had a conversation with them that lasted more than 10 minutes, praised them when they did well, asked them where they were going and asked how they were doing in school.

The protective effect of family dinners held even after the researchers took into account other factors that could impact the results including race, ethnicity, gender, socio-economic status and who the child lived with.

Family meals are a good opportunity to stay connected with children, Fulkerson said. "You might have a better sense of what's going on in their lives and be able to understand what they're going though more," she said.

Fulkerson suggests avoiding topics that might be a point of conflict for parents and children, such as grades and homework.

Children Misbehave, as They are Not Part of Family Dinner