Chandrakhar Adhikari does not know whether he will ever see his two brothers again. Earlier this year, the pair left the refugee camp in Nepal where the family had lived for 17 years for a new life in Kentucky, reluctantly leaving 29-year-old Adhikari behind because he refused to go with them.

Thousands of Bhutanese refugees are now leaving the camps in eastern Nepal, where they have languished for almost two decades, under a United Nations resettlement programme. 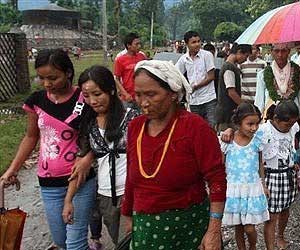 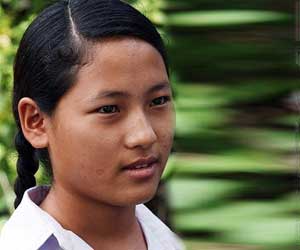 A 16-year-old Bhutanese refugee in a camp in Nepal 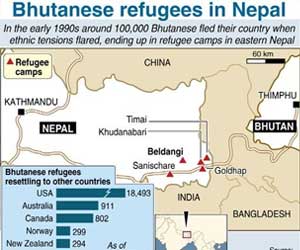 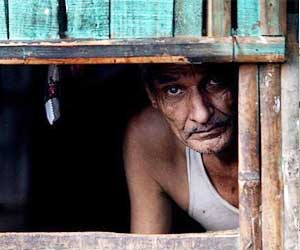 But a significant minority say they do not want to leave, forcing families to choose between staying with their loved ones and the promise of a new life in the West.


"Bhutan runs in my veins, it is in my blood," Adhikari told AFP in his tiny bamboo hut in the Beldangi camp, home to 40,000 refugees who fled their homes when ethnic tensions flared in Bhutan in the early 1990s.

Climate change will not only hit drier cities like the Indian capital but also modify the migration patterns of rural and urban areas, warns a UN report released Wednesday.
Advertisement
"I can still remember my village and my neighbours, and I want one day to return to Bhutan. This refugee problem needs to be resolved, and it will not be resolved if we resettle."

Bhutan's government says the people who left were either illegal immigrants or went voluntarily. The refugees, who have no right to work or own land in Nepal, insist they are Bhutanese citizens.

Numerous rounds of high-level talks between Nepal and Bhutan have failed to reach an agreement on repatriation.

Adhikari says his brothers are enjoying their new life, although they have to work much harder than in Nepal, where refugees cannot legally seek employment and have food and education provided for them.

"They could not even celebrate Dashain (a Hindu festival) this year because their American employers did not give them time off. Their children will grow up not knowing their own culture," he said.

Since the resettlement programme was launched in 2007, around 21,000 refugees have left the camps near Nepal's eastern border with India to begin new lives in countries including the United States, Australia and Norway.

Several times a week, a charter plane leaves the local airport for Nepal's capital Kathmandu, bearing refugees bound for Western countries they know little or nothing about.

After almost two decades in the camps, most of the refugees are happy to be moving on.

But their departure leaves a huge hole in the community -- often literally as their huts are pulled down to make room for vegetable plots to supplement the remaining refugees' rations.

Om Prakash Dunghal's parents and younger brother had just left the camp on the day AFP interviewed him, bound for Colorado, where he planned to follow them with his wife and daughter.

"We are happy to be leaving, though I have spent 14 years here so it is quite emotional," he said.

"My wife's father and brother say they do not want to go. I hope we can persuade them, it will be very hard to leave them behind."

The UN refugee agency UNHCR says it is doing all it can to ensure families remain together.

"Whether to go on resettlement or not is an individual and a family decision," said Diane Goodman, deputy representative for the UNHCR in Nepal.

"If an elderly person in the family does not wish to go for resettlement, we conduct further assessments before processing such cases."

But in a culture where women traditionally live with their husbands' parents after they marry, and extended families live cheek-by-jowl, it is not always possible to ensure that everyone remains together.

For 50-year-old refugee Damber Kumari, leaving the camp would be unthinkable.

In October 2007 Kumari's son left home saying he was going to seek work abroad. Four months later, the family received news that he had been arrested and imprisoned in Bhutan, although they say they do not know why he went there.

"He used to say that we had to find a way of getting back to Bhutan," said Kumari, her eyes welling with tears.

"The Red Cross helped us to go to Bhutan to visit him in jail and he told us he wanted to see his country.

"I have another son and daughter, but how can we go for resettlement when he is there?"

The UNHCR is putting in place measures to ensure that refugees left behind -- particularly older ones who do not want the upheaval of resettlement -- are taken care of in the camps if their families leave.

But at 85, Hari Maya Mainali says she has no qualms about starting a new life on another continent.

"I love this place, but we have to go where we can survive," said Mainali, who hopes to follow her son and his wife to Jersey in the United States.

"Wherever we have food to eat, that's home."

Relief workers may battle chronic insecurity to deliver aid to the tens of thousands displaced by the Darfur war, but recipients in this southern Sudanese market trade handouts for luxuries.
Advertisement
<< Poorest Children Missing Out on Vaccination Boom
Migrant Workers Face Abuse in South Korea: Amnesty >>