Face Cleanliness Can be Assessed for Trachoma 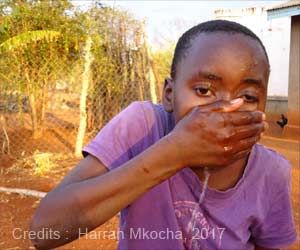 Facial cleanliness can now be a part of the control strategy for trachoma. The repeated eye infections are caused by the bacterium Chlamydia trachomatis, reveals a new study.

Advertisement
‘Facial cleanliness can help asses a child's face for the presence or absence of nasal and ocular discharge.’

The findings suggest that measures of facial cleanliness can be added to trachoma surveys in the developing countries where the infection is a public health problem.


Trachoma is the leading infectious cause of blindness worldwide and is a known public health problem in rural areas of 41 countries of Africa, Central and South America, Asia, Australia and the Middle East.
Advertisement
The elimination strategy is encapsulated by the acronym "SAFE": Surgery for advanced disease, Antibiotics to clear infections, Facial cleanliness and Environmental improvement.

In the new work, Sheila West of Johns Hopkins University, and colleagues trained seven staff in Tanzania, with a variety of educational backgrounds, on how to assess the presence and absence of nasal and ocular discharge on children's faces.

Then, sixty children ages 1 through 7 were evaluated by the graders at two time points, approximately 50 minute apart for presence or absence of a clean face.

The variation between graders and between grading sessions was quantified using unweighted kappa statistics. The average inter-observer agreement was kappa=0.78 and the average intra-observer agreement was kappa=0.72. These are better reliability measures than were previously reported in a study assessing the reliability of ocular and nasal discharge observations.

"As long as training is provided, the estimate of clean faces in children should be reliable, and reflect the effort of families to keep ocular and nasal discharge off the faces," the authors say.

"We recommend conducting more inter-observer trials in various trachoma settings and that assessing clean faces be added to surveys to trachoma control, which already measure environmental improvements, in districts."

Trachoma
Trachoma is a bacterial eye infection. It is the main cause of irreversible blindness due to ......