Eyes can Reveal Your Sexual Inclination 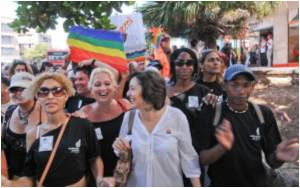 A recent Cornell university research has found that sexual inclinations can be known by optical reflexes.

Pupil dilation has long been known to hold a clue to a person's level of excitement and now they may reveal one's sexual orientation as well.


The study showed that the response of participants agreed with their sexual orientation -scientists observed pupil dilation according to their level of excitement on seeing the different images.

Researchers now wish to explore this connection due to perplexing results in the case of women, who appeared to respond in an excited way to sexual images itself ,irrespective of their sexual orientation.

Cybersex can Influence the Invention of New Technology

Performance, Not Sexual Orientation, Key for Support from Soccer Fans

More than 93 percent of soccer fans revealed that they would continue to support players who openly admit to be gay.

Our Impressions of Others Are Influenced By Our Sexual Orientation

When it comes to white men, being straight may make you more likable but in the case of black men, gays have a likeability edge, a new study has revealed.
News A-Z
A B C D E F G H I J K L M N O P Q R S T U V W X Y Z
What's New on Medindia