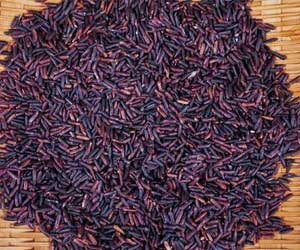 Purple rice packed with high levels of natural antioxidants is found to be more attractive and nutritious. It has been a part of traditional religious and cultural ceremonies across Asia for generations. A new study identifies that the use of traditional farming practices preserved the genetic diversity of purple rice.

Does your New Year's resolution diet include healthy whole grains? Purple rice is a whole grain with high levels of antioxidants  and high levels of genetic diversity, thanks to traditional farming practices, according to new research from Washington University in St. Louis.

Advertisement
‘Purple rice a whole grain packed with high levels of natural antioxidants is found to be highly nutritious. The use of traditional farming practices can preserve the genetic diversity of purple rice.’
Read More..

Dark-pigmented varieties of rice  including the purple and black varieties marketed in the U.S. as "forbidden rice"  contain some of the same compounds found in antioxidant superfoods like blueberries.


Eye-catching and nutritious, purple rice has enjoyed a special place as part of traditional religious and cultural ceremonies across Asia for generations. In a new study in the journal Economic Botany, Kenneth M. Olsen, professor of biology in Arts & Sciences, worked with collaborators at Chiang Mai University in Thailand to examine the genetic repercussions of a longstanding local practice of saving and replanting purple rice.
Advertisement
"Our study revealed that traditional smallholder farmers in Thailand are preserving a treasure trove of genetic diversity in purple rice," said Olsen, a rice expert whose other recent research has focused on the de-domestication and evolution of weedy rice, or rice has gone rogue.

Purple rice is grown across Asia. It is mostly used in preparing desserts in Thailand, especially in the northern and northeastern regions of the country. In these regions, each farmer traditionally grows purple rice in a very small portion  typically less than 5 percent of their land. After harvest, the purple rice is divided into two parts, one for use within the household and the other as the seed source for the next year's crop.

"Although individual farmers only grow (purple rice) in small quantities  and primarily for consumption by their own family  one family's variety is likely to be genetically distinct from that of another family nearby," Olsen said.

"This is the sort of genetic diversity that gets wiped out with large-scale commercial farming, where only a single genetically-uniform variety may be grown over a wide geographical area," he said.

But can you taste the difference? Even Olsen, who describes purple rice as "delicious, with a sort of nutty, berry-like flavor and a slightly chewy texture," believes it's about more than taste.

The genetic diversity that is preserved in traditional rice varieties (purple and otherwise) can serve as a tremendous resource for rice crop breeding and improvement, Olsen said. For example, they can be used for breeding varieties that can withstand the droughts, floods and other erratic weather conditions that have become increasingly problematic in Thailand in recent years.

Top 10 Health Benefits of Black Rice
Black rice was once reserved only for the kings. But, today everyone can avail the benefits of this ...