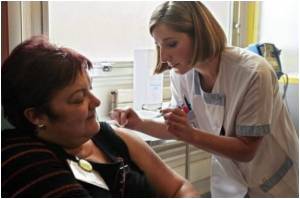 For those infected with the 2009 pandemic influenza A (H1N1) virus, extreme obesity was a powerful risk factor for death, according to an analysis of a public health surveillance database.

In a study to be published in the February 1, 2011, issue of Clinical Infectious Diseases, researchers associated extreme obesity with a nearly three-fold increased odds of death from 2009 H1N1 influenza. Half of Californians greater than 20 years of age hospitalized with 2009 H1N1 were obese.

Data from 500 adults hospitalized with H1N1 in the first four months of 2009 in California were analyzed to test the hypothesis of obesity as a risk factor for increased fatality. Extreme obesity is defined as having a body mass index (BMI) equal to or over 40. The data was collected April 20 - Aug. 11, 2009, by health providers and reported to local health departments, which subsequently provided the data to the California Department of Public Health. During this period, H1N1 accounted for 50 percent of influenza-like illnesses. Patients under 20 years of age and pregnant patients were excluded from the study.


"Extremely obese persons with a body mass index equal to or over 40 should get vaccinated annually for influenza," according to study author Janice K. Louie, MD, MPH, of the California Department of Public Health. "They should also see their health provider early if symptoms of influenza develop, so that they can get diagnosed and treated as quickly as possible. This is especially important if the influenza virus is known to be circulating in the community and causing illness." Dr. Louie stressed that more research is needed to understand why extremely obese people are more likely to die from the 2009 H1N1 influenza infection.

Find out the risks for contracting swine flu and take the necessary precautionary steps. Swine flu caused a pandemic in 2009 with several deaths reported worldwide.
Advertisement
<< One in Five Patients Get Unneeded Cardiac Implants
Personality Traits Impact Quality of Life After Breast Reco... >>

Sanatogen Drug Interaction Checker Pregnancy Confirmation Calculator Sinopril (2mg) (Lacidipine) The Essence of Yoga Accident and Trauma Care A-Z Drug Brands in India Find a Doctor Vent Forte (Theophylline) Drug Side Effects Calculator
This site uses cookies to deliver our services.By using our site, you acknowledge that you have read and understand our Cookie Policy, Privacy Policy, and our Terms of Use  Ok, Got it. Close
×