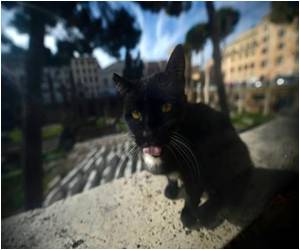 An ancient kitten-sized predator has now been discovered by a university student and his mentor, which is assumed to be one of the smallest species in the extinct order Sparassodonta.

Third-year undergraduate student Russell Engelman and Case Western Reserve anatomy professor Darin Croft made the finding by analyzing a partial skull that had been in a University of Florida collection more than three decades.

"The animal would have been about the size of a marten, a catlike weasel found in the Northeastern United States and Canada, and probably filled the same ecological niche," said Engelman, an evolutionary biology major from Russell Township, Ohio.


The researchers refrained from naming the new species mainly because the specimen lacks well-preserved teeth, which are the only parts preserved in many of its close relatives.
Advertisement
The skull, which would have been a little less than 3 inches long if complete, shows the animal had a very short snout. A socket, or alveolus, in the upper jaw shows it had large, canines, that were round in cross-section much like those of a meat-eating marsupial, called the spotted-tailed quoll, found in Australia today, the researchers said.

Although sparassodonts are more closely related to modern opossums than cats and dogs, the group included saber-toothed species that fed on large prey. This small Bolivian species probably fed on the ancient relatives of today's guinea pigs and spiny rats, the researchers said.

"Most predators don't go after animals of equal size, but these features indicate this small predator was a formidable hunter," Croft said.

Fishes from Acidic Ocean Waters Less Skilled at Smelling Predators
Carbon dioxide from the atmosphere dissolves into the water and lowers the pH of the water, causing ...