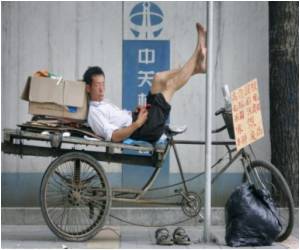 A research abstract that will be presented Monday, June 7, 2010, in San Antonio, Texas, at SLEEP 2010, the 24th annual meeting of the Associated Professional Sleep Societies LLC says that exposure to extraordinarily brief, millisecond flashes of bright light improves alertness at night.

Results indicate that subjective sleepiness decreased and objective nighttime alertness improved after participants received a two-millisecond pulse of bright light once per minute for 60 minutes. Flash exposure, as compared with darkness, elicited significant improvement in self-rated alertness and a significant 57-millisecond improvement in median reaction time on the auditory Psychomotor Vigilance Test, compared with no significant improvement after 60 minutes of darkness. This was accompanied by significant changes in the faster frequencies of the EEG following exposure to the flashes.

"We found it shocking that light exposure as brief as a few milliseconds could engender changes in alertness and brain wave activity," said principal investigator Jamie M. Zeitzer, PhD, assistant professor in the department of psychiatry and behavioral sciences at Stanford University in Palo Alto, Calif. "These results change the manner in which we think about the brain's capacity to respond to light."


The randomized crossover study involved seven people who were tested two times, with the sessions separated by more than two weeks. In each testing condition they were wakened two hours after their typical bedtime for stimulus administration. Once they were exposed to an hour of darkness, and once they were exposed to a total of 120 milliseconds of bright light pulses during an hour of darkness. Vigilance was measured immediately before and at the end of the 60-minute stimulus.

Sleep is a barometer of good health in the elderly. Sleep problems in the elderly are controlled by various external and internal factors.
Advertisement
According to the American Academy of Sleep Medicine, the solar light-dark cycle is the primary environmental time cue for synchronizing the circadian system to the 24-hour day. Artificial light absorbed by visual photoreceptors also can affect circadian timing by triggering the suppression of melatonin, a hormone that acts as a "darkness signal."

AASM practice parameters indicate that timed light exposure in the work environment can decrease sleepiness and improve alertness during night shift work. However, bright light therapy typically involves exposure to up to 10,000 lux of light for scheduled periods of 20 minutes or more.

The physical, emotional and hormonal changes that occur in women during puberty, menstrual cycle, pregnancy, and menopause can cause Sleep Disturbances
Advertisement
Advertisement
This site uses cookies to deliver our services.By using our site, you acknowledge that you have read and understand our Cookie Policy, Privacy Policy, and our Terms of Use  Ok, Got it. Close
×