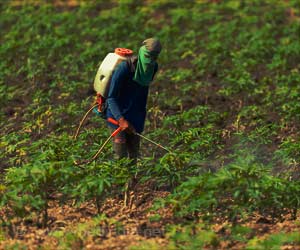 The presence of the herbicide glyphosate and its metabolite increased between 1993 and 2016 in older adults living in Southern California.

Glyphosate, the primary ingredient in a herbicide sprayed onto genetically modified crops, is found in these crops at harvest. Genetically modified crops were introduced in the United States in 1994. Environmental exposure through dietary intake of these crops has potential adverse health effects and can be assessed by measuring urinary excretion.

Paul J. Mills, Ph.D., of the University of California, San Diego, and colleagues measured excretion levels of glyphosate and its metabolite aminomethylphosphonic acid (AMPA) in participants from the Rancho Bernardo Study of Healthy Aging.

The authors write that animal and human studies suggest that chronic exposure to glyphosate-based herbicides can induce adverse health outcomes. In July 2017, in accordance with the Safe Drinking Water and Toxic Enforcement Act of 1986, the state of California listed glyphosate as a probable carcinogen. "Future studies of the relationships between chronic glyphosate exposure and human health are needed."

Strawberries, Spinach Top List of Foods Containing Most Pesticides
An annual report by the Environmental Working Group found that nearly 70% of samples of 48 types of ...