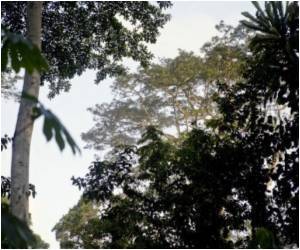 International accords have little impact on saving vulnerable forests, because they don't understand the core causes such as growing demands for bio fuels and food crops, says a report.

With Africa and South American alone losing 7.4 million hectares (18.3 million acres) of forest a year, the International Union of Forest Research Organizations (IUFRO) said a drastic change of policy is needed by the United Nations and governments.

Purdue University scientists have found the gene that is responsible for the production of the amino acid phenylalanine.
Advertisement

Sixty international experts said in the report, to be presented at a UN forum this week, that too much attention is being put on forests as a store of carbon dioxide, the main gas blamed for global warming.


Deforestation accounts for about a quarter of the global greenhouse gas emissions each year which are blamed for rising temperatures. Live trees act as a sponge for carbon but give it off when they decay or are burned.

Setting Up Legal Rights for Forest Dwellers can Reduce Deforestation

A new report has determined that setting up legal rights for forest-dwelling peoples costs little, and can make a big difference to efforts aimed at reducing deforestation.
Advertisement
"Our findings suggest that disregarding the impact on forests of sectors such as agriculture and energy will doom any new international efforts whose goal is to conserve forests and slow climate change," said Jeremy Rayner of the University of Saskatchewan and chairman of the IUFRO report panel.

Even the most recent UN backed initiative, Reducing Deforestation in Developing countries (REDD) is criticized because the panel said it seeks a single global solution.

The experts said that REDD and other international accords should concentrate on helping known as REDD, should focus more on supporting regional and national efforts to save the forests at risk.

"Unless all sectors work together to address the impact of global consumption, including growing demand for food and biofuels, and problems of land scarcity, REDD will fail to arrest environmental degradation and will heighten poverty," said Constance McDermott of Oxford University?s Environmental Change Institute.

The experts praised initiatives in Asia and Europe which they said should be copied elsewhere.

The Association of Southeast Asian Nations (ASEAN) has developed a regional standard for monitoring illegal logging and also set up a special system for forest-related research.

"The hope is that such a process will allow decision-makers to learn from the mistakes of the past," said the IUFRO report.

Among other "bright spots", IUFRO pointed to a US law which makes it illegal to import wood known to come from stolen timber.

The European Union is making a similar effort to halt illegal wood imports through "due diligence" investigations, which has led to partnerships with major exporters such as Cameroon.

Brazil, long the target of an international campaign to reverse its forest destruction, has enacted new environmental and policy reforms that have the potential to slow forest loss in the Amazon Basin, IUFRO said.

The report is to be presented to the UN Forum on Forests this week as part of the launch of the International Year of Forests.

City Trees - a Deterence to Crime

Color Blindness Calculator A-Z Drug Brands in India Find a Hospital Nutam (400mg) (Piracetam) Diaphragmatic Hernia Accident and Trauma Care Drug - Food Interactions Drug Side Effects Calculator Sanatogen Calculate Ideal Weight for Infants
This site uses cookies to deliver our services.By using our site, you acknowledge that you have read and understand our Cookie Policy, Privacy Policy, and our Terms of Use  Ok, Got it. Close
×