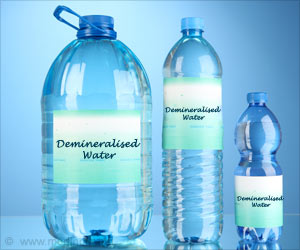 Engineers have found a material for cost effectively removing salt from seawater, the process is called desalination.

The material, a nanometer-thick sheet of molybdenum disulfide (MoS2) riddled with tiny holes called nanopores, is specially designed to let high volumes of water through but keep salt and other contaminates out.

A research team has debunked a popular hypothesis in paleo-ocean chemistry.
Advertisement
‘Finding materials for efficient desalination has been a big issue for scientists, and most available desalination technologies rely on a process called reverse osmosis to push seawater through a thin plastic membrane to make fresh water.’

"Even though we have a lot of water on this planet, there is very little that is drinkable. If we could find a low-cost, efficient way to purify sea water, we would be making good strides in solving the water crisis," said study leader professor Narayana Aluru from University of Illinois at Urbana-Champaign.


The team modeled various thin-film membranes and found that MoS2 showed the greatest efficiency, filtering through up to 70 percent more water than graphene membranes.

The World's Looming Water Crisis May Be Answered By Seawater Desalination

Over one-third of the world's population, already struggling to keep up with the demand for fresh water, could quench their thirst if salty seawater could be filtered by a cheap process
Advertisement
"Finding materials for efficient desalination has been a big issue, and I think this work lays the foundation for next-generation materials," Aluru added. Most available desalination technologies rely on a process called reverse osmosis to push seawater through a thin plastic membrane to make fresh water.

The membrane has holes in it small enough to not let salt or dirt through, but large enough to let water through. They are very good at filtering out salt, but yield only a trickle of fresh water.

"Reverse osmosis is a very expensive and energy intensive process. A lot of power is required to do this process, and it's not very efficient. In addition, the membranes fail because of clogging," Aluru said.

"So we'd like to make it cheaper and make the membranes more efficient so they don't fail as often. We also don't want to have to use a lot of pressure to get a high flow rate of water," he said. The study was published in the journal Nature Communications.

University of Strathclyde researcher has developed a nano-filter that could desalinate sea water and transform into more and more fresh drinking water.
Advertisement
<< Health Screening for Indians Flying to Kuwait is Foolproof
Study Sums Up Health Issues for New Refugee Children of US >>

Battleships Could Soon Use Seawater As An Alternative To Petroleum Fuel

Seawater could be used to fuel up US Navy's ships after they vowed to cut their petroleum use in half by 2015, reveal scientists.

Post-Nasal Drip The Essence of Yoga Nutam (400mg) (Piracetam) Iron Intake Calculator Accident and Trauma Care How to Reduce School Bag Weight - Simple Tips Diaphragmatic Hernia Drug Side Effects Calculator Sinopril (2mg) (Lacidipine) Pregnancy Confirmation Calculator
This site uses cookies to deliver our services. By using our site, you acknowledge that you have read and understand our Cookie Policy, Privacy Policy, and our Terms of Use