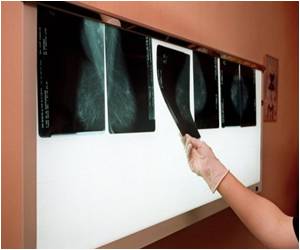 They used advanced microscopes equipped with tissue-penetrating laser light and it helps to tell if the cancer has spread.

One of the most deadly subtypes of breast cancer is genetically more similar to ovarian tumors than to other breast cancers, shows study.
Advertisement

The Johns Hopkins researchers say their crisscrossing optical images, made by shining a laser back and forth across a biopsied tissue sample a few millionths of a meter thick, can potentially be used with other tests to more accurately determine the need for lymph node biopsy and removal in women at risk of metastatic breast cancer.


In what is believed to be the first study to measure minute changes in tumor connective tissue fibers, researchers found that eight women whose cancers had spread beyond the breast through the body's lymphatic system had about 10 percent more densely packed and radially spread-out collagenous structural proteins than six women whose cancers had not yet spread. Collagen fibers in the non-metastasized tumors, also obtained during breast biopsy, were more diffuse and arranged in a transverse or horizontal pattern. All 14 women in the study had aggressive, malignant breast cancer.

A plant compound phenethyl isothiocyanate (PEITC) can help in reducing the growth of breast cancer.
Advertisement
In the new report, to be published in the Journal of Biomedical Optics online Nov. 1, researchers say that if these "proof of principle" findings hold up in testing now under way in hundreds more women with or without metastatic breast cancer, then their new optical imaging tool could simplify testing for spreading disease and help people avoid unnecessary lymph node surgery.

"Our new diagnostic technique has the potential to help reassure thousands of breast cancer patients that their cancers have not spread to other organs, and could help them avoid the risks and pain currently involved in direct inspections of lymph nodes for the presence of cancerous cells," says study senior investigator Kristine Glunde, Ph.D.

Women with denser tumor fiber patterns would likely stand a greater chance of needing lymph node biopsy and removal and inspection of such tissue for malignant cells, says Glunde, an associate professor at the Johns Hopkins University School of Medicine Russell H. Morgan Department of Radiology and the Sidney Kimmel Comprehensive Cancer Center.

Glunde says complications from lymph node biopsy and more invasive dissection include risk of infection, pain, severe swelling and leakage of lymph fluid around the armpit, as well as stiffening in the arm, which can be permanent. An estimated 230,000 Americans were diagnosed in 2011 with invasive breast cancer, while another 57,000 were found to have noninvasive, or in-situ breast cancer.

Cancer imaging experts have known for more than a decade that the fibrous connective tissue located between cancer cells changes and bunches together as tumors grow and disease spreads, says study co-investigator Zaver Bhujwalla, Ph.D., a professor at Johns Hopkins and its Kimmel Cancer Center.

"Until now, however, we had no proof in principle that such minute and progressive changes outside cancer cells, in the tumor micro-environment or extracellular matrix, could be measured and potentially used to better guide our staging and treatment decisions," says Bhujwalla, who also serves as director of the Johns Hopkins In Vivo Cellular and Molecular Imaging Center (ICMIC), where the latest imaging study was performed.

It was also at ICMIC in 2010, supported with funds from the U.S. National Cancer Institute (NCI), that Glunde, Bhujwalla and fellow study co-investigator Meiyappan Solaiyappan, B.S., developed the specialized computer software used to analyze the microscopic spaces between tumor collagen fibers and calculate their density.

The tissue fiber images were obtained using an optical imaging technique called second harmonic generation microscopy, in which a long-wavelength laser light is deflected off the collagen fibers for a few seconds, allowing for several planes and fields of view to be captured. The longer infrared wavelength, at 880 micrometers, was chosen because it can penetrate the tissue beyond the colorful light waves visible to the human eye, but does not damage and heat up the cancer cells, as a slightly longer infrared wavelength would. Glunde says the many fields of view were randomly taken throughout the tissue sample, providing a "realistic representation of each breast cancer sample." Breast biopsy samples came from tissue research collections in Maryland.

Tumor Markers For Cancer Diagnosis and Prognosis
News Archive
News Resource
Advertisement
News Category
Is Drought Associated With Increased Diarrhea Risk Why Mosquitoes are Attracted to Only Some People? Norovirus, Stomach Viruses can Spread Through Saliva Putting the Brakes on a Bacterium That Cause Digestive Problem Monkeypox May Become a Sexually Transmitted Disease in America
More News
Sign up for Wellness Consult a Doctor Sign up for Selfcare