Expert Says Obese Americans May Be Pushed Toward Unhealthy Decisions 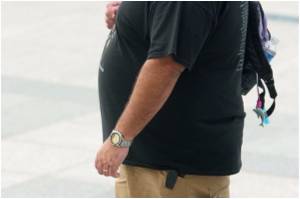 Margo Wootan, Director of Nutrition Policy at the Center for Science in the Public Interest (CSPI) says obese adult Americans are being pushed toward unhealthy choices without even realizing it. With more than one third of adult Americans considered to be obese, and 12.5 million children and adolescents likely to become obese adults, Wootan describes a combination of environmental factors at work in the growing obesity epidemic. As a result of these negative influences, maintaining a healthy weight becomes a much more difficult undertaking. The solution involves an emphasis on education and increased transparency in nutritional information labels for consumers.

"You notice that the odds are stacked against you," Wootan continues, "when you consider that most marketing is unhealthy and in many places the only available food is providing poor nutritional choices." Overwhelmingly unhealthy options are found in the places we frequent most: schools, work places, convenience stores, and restaurants. These environmental factors and increasingly sedentary lifestyles have contributed to the dramatic increase of obesity rates over the past 20 years.

Although obesity is a nationally recognized epidemic contributing to many life-threatening illnesses, the percentage of obese Americans is expected to increase in the coming years. Most Americans would choose to be healthy if that option were easier. Unfortunately, battling the powerful influence of the food industry proves to be a daunting task. Well funded, politically connected, and fueled by an agenda that is more concerned with the latest sales report rather than health statistics, food manufacturers do not have our best interests in mind. Our daily environment is inundated with marketing campaigns influencing us with attractive advertisements of high-calorie foods that are proven to trigger appetites and contribute to overeating. The availability and convenient packaging of these unhealthy options make them difficult to avoid, exacerbating the situation.


Often, healthier options are more expensive and more difficult to find. In some communities, fresh produce and nutritious foods are not even available to the average person.

Margo Wootan, Director of Nutrition Policy at the Center for Science in the Public Interest (CSPI), understands first-hand the difficult road laid out by the food industry. She emphasizes the importance of the default choice: "Before you even have time to think, you are offered unhealthy options and you take them because it''s the easiest. Two thirds of people will stick with whatever the default choice is, so why not make the healthy choice the easy choice?" This isn''t to say that people are not intelligent or capable of making healthy decisions, but often times information is misleading and confusing and the best decision isn''t always apparent.

Restaurants are another major culprit contributing to obesity. Going out to eat should be fine, but healthy menu choices are scarce, and portion sizes keep getting bigger. Wootan argues that chain restaurants should be required to post nutrition information so that people have all the facts to make an informed decision.

"We are indeed much more than what we eat, but what we eat can nevertheless help us to be much more than what we are". - Adelle Davis There are thousands out there battling 'the bulge'. With childhood obesity on the rise even children are not spared. If your weight issues are threatening to weigh you down learn more about obesity by taking part in this quiz.
Advertisement
"It happens too frequently that the health value is not appropriately communicated, and people are under the assumption that some things are better for them when they are not."

Significant measures are being taken to improve the education and availability of healthy choice foods, including efforts to require labels to include trans fat information and a movement to eliminate junk food from schools. Most of those going up against the food industry find themselves at a disadvantage because they have so many fewer resources, and it takes a long time to get the word out and change attitudes toward policies. Powering through the opposition from the food industry takes a build up of momentum and awareness. "Our most powerful asset is that we are right and they are wrong. Messaging is easier because what we say makes sense, while they work clearly in their own self-interest," Wootan explains.

CSPI makes it a priority to deliver the latest science and research information in everyday language so that people can understand what it means to them personally. Their studies always remain true to the science, yet they have learned to communicate the information in interesting ways.

It is important to emphasize the practical application of a healthy standard of living in a way that will resonate with the average American.

All of this hard work has not gone unanswered when you consider recent public measures that indicate a step in the healthy direction. Disney World has set a bold precedent for healthy eating by promoting nutritious food choices in their theme parks and Mayor Bloomsberg of New York City has also contributed to the cause by eliminating super-sized sugary beverages. Companies are marketing and selling such huge portion sizes, that we have forgotten what a normal portion looks like. Even the 16 oz. limit imposed in NYC will include two serving sizes. Normalizing portion sizes again is a huge step in bringing us back to reality and understanding the truth when it comes to nutrition.

In general, people are attracted to the idea of a healthy lifestyle, but everyone has a role to play in order to get there. "Overall, we are beginning to make some progress in addressing obesity, but there is still a long way to go. The country needs to make a bigger commitment and do more. After smoking, what people eat has the biggest effect on their well-being. We are really not doing enough to make it possible for people to eat better. A lot of individuals are trying, but they find it so hard, because of how much easier the unhealthy options are." Wootan and CSPI believe that finding ways to facilitate better eating is our best bet at combatting this rising obesity epidemic.

Obesity Underestimated By Mothers And Children in China

According to Penn State health policy researchers, childhood obesity is on the rise in China, and children and parents there tend to underestimate body weight.
Advertisement