As early introduction to advanced technology is damaging to their brains, a leading psychologist has urged schools to ban children under the age of nine from using computers.

Psychologist and author Dr Aric Sigman was speaking at a conference of childcare specialists in the UK, and he said technology affected children's attentions spans and was harmful to their under-developed brains.


Sigman said rules introduced in the UK in 2008, which recommends toddlers be introduced to computers as early as 22 months of age were "subverting the development of children's cognitive skills".


"There is evidence to show that introducing information and communication technology (ICT) in the early years actually subverts the very skills that government ministers said they want children to develop, such as the ability to pay attention for sustained periods," News.com.au quoted him as saying.

"The big problems we are seeing now with children who do not read, or who find it difficult to pay attention to the teacher, or to communicate, are down to attention damage that we are finding in all age groups," he stated.

The Early Years Foundation Stage or "nappy curriculum" suggests computers should be introduced from 22 months and that from 40 months children should be able to "perform simple ICT functions, such as select a channel on the TV remote control and use a mouse and keyboard to use age-appropriate software".

Primary schoolchildren in the UK have at least one ICT lesson a week and computer use is widespread.

Debate about the benefits of introducing children to technology at a young age is mixed.

A number of studies in the US show that age-appropriate software can help language development.

Sigman said that even though screen technology can assist learning, children should be introduced at a later stage.

"It must be introduced and used judiciously at much later ages - ideally at least age nine - or it can subvert the development of the cognitive skills and curiosity it was intended to foster and enhance," he added.

Too Much of Computer Use is Making Aussie Workers Dumb
The increase in the use of email and computers in workspots could me making both skilled and educated workers dumb, a recent report has revealed.
READ MORE 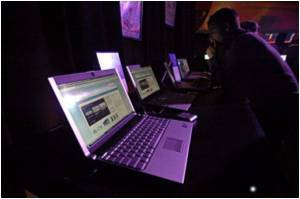 British Scientist Infects Himself With Computer Virus
Dr Mark Gasson, a cybernetics expert at the University of Reading, has become the first human to be infected with a computer virus.
READ MORE

Revealed: Baby Bubbler a Breath of Fresh Air
A team of Rice University seniors have developed a device that could save babies' lives.
READ MORE