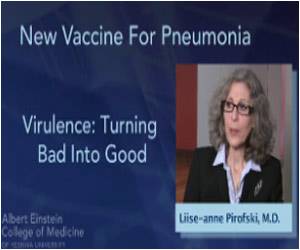 Researchers have developed a new, experimental vaccine that protects against deadly pneumonia. Pneumococcal pneumonia occurs when the lungs are infected with the bacterial species Streptococcus pneumoniae (also known as pneumococcus).

Like many microbes that cause pneumonia, pneumococcus is spread from person to person through coughing or sneezing, said principal investigator Liise-anne Pirofski, M.D. professor of medicine and of microbiology & immunology and the Selma and Dr. Jacques Mitrani Chair in Biomedical Research. Symptoms include cough, fever, shortness of breath, and chest pain.

The National Foundation for Infectious Diseases estimates that 175,000 people are hospitalized with pneumococcal pneumonia in the United States each year. In addition to pneumonia, pneumococcus causes 34,500 bloodstream infections and 2,200 cases of meningitis annually. It is responsible for more deaths in the United States 4,800 a year than any other vaccine-preventable disease. It poses a particular problem in the developing world, where it is estimated to cause more than one million deaths in children each year, according to the World Health Organization. Details of the new vaccine, which was tested in an animal model, are reported in a paper published today in the Journal of Infectious Diseases.


A pediatric vaccine has dramatically reduced the incidence of pneumococcal disease in children and adults, both by protecting vaccinated children and by reducing person-to-person transmission of the bacterium to others a phenomenon known as herd immunity.

In Kenya, a vaccine against pneumonia was launched to save hundreds of thousands of lives in coming years.
Advertisement
The pediatric vaccine is a great victory for modern medicine, but it doesn't cover all strains of disease-causing pneumococcus some of which have recently emerged and are very virulent, said Dr. Pirofski. This problem, coupled with the fact that herd immunity doesn't protect immunocompromised patients as effectively as people with normal immunity, led us to look for a better vaccine.

The researchers focused on developing a vaccine against serotype 3 a pneumococcal strain that was not included in the pediatric vaccine used for the past decade and that has emerged as a cause of serious pneumonia in adults and children. Serotype 3 can trigger inflammation so overwhelming that it can result in very severe disease or even death.
The goal of this study was to produce a vaccine consisting of a live, attenuated (weakened) version of serotype 3 S. pneumoniae. To create their vaccine, the researchers focused on the serotype 3 gene that codes for pneumolysin, a toxin produced by all pneumococcal strains. The researchers replaced this gene with a synthetic version that they hoped would reduce the amount of toxin produced.

Our idea was to design a live vaccine that would stimulate the immune system sufficiently to ward off disease but wouldn't lead to the severely damaging inflammatory response that this strain can cause,said lead author J. Robert Coleman, Ph.D., a postdoctoral fellow in microbiology & immunology at Einstein, who helped develop the gene-modification technique, known as synthetic gene customization, while a graduate student at Stony Brook University.

The novelty of this approach lies in the fact that the genes expression would be reduced, but not eliminated, Dr. Coleman added. Previous approaches to genetic regulation of virulence relied on knocking out genes, which eliminates their expression completely.

This method of reducing gene expression had been used for viral pathogens, but this is the first time that gene customization has successfully controlled virulence in bacteria. The study's findings could potentially lead to pneumococcal vaccines based on weakened strains, and the Einstein researchers are now investigating whether they can reduce the expression of other genes associated with pneumococcal virulence.