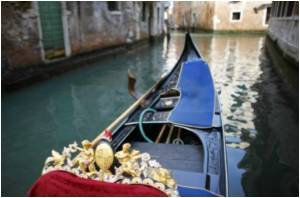 Venice, the charming city of canals, will probably drown by three inches over the next 20 years.

"Venice appears to be continuing to subside, at a rate of about 2 mm a year," said Yehuda Bock, geodesist with Scripps Oceanography Institute, University of California, San Diego, who led the study, reports the journal Geochemistry, Geophysics, Geosystems.


Given that the sea level is rising in the Venetian lagoon, also at 2mm per year, the slight subsidence doubles the rate at which the height of surrounding waters are increasing relative to the elevation of the city, he noted.
Advertisement
As geodesist, Bock deals with the measurement and representation of the Earth, including its gravitational field, according to a Scripps statement.

Bock worked with colleagues from the University of Miami in Florida and Italy's Tele-Rilevamento Europa, a company that measures ground deformation, to analyse data collected by GPS and space-borne radar (InSAR) instruments regarding Venice and its lagoon.

Symbolic Funeral Procession held to Underline Venice's Reducing Population
The population of Venice is falling and to spread the message hundreds of people gathered on ......

Venice Residents Protest Against City's Conversion into a 'Theme Park'
Residents of Venice in northern Italy held an ironic protest on Sunday against rising prices and ......

Now Visit Venice's Canals - Virtually!
Internet users can now travel along the canals of Venice from the comfort of their own homes to ......