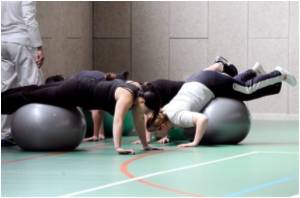 Overweight teenagers get mental health boost from even small amounts of exercise, reveals study. Being obese at any age is commonly associated with a litany of health issues, ranging from diabetes and chronic fatigue to heart complications.

Overweight adolescents are also at an increased risk of body dissatisfaction, social alienation and low self esteem, which is why Dr. Gary Goldfield, registered psychologist, clinical researcher at the Children's Hospital of Eastern Ontario (CHEO) Research Institute, and Associate Professor in the Department of Pediatrics, University of Ottawa, set out to discover how exercise might impact these factors in teens.

"The first thing I tell teens and parents struggling with their weight in my practice is to throw away the scale," said Dr. Gary Goldfield.


"These kids face enough challenges with bullying and peer pressure today! This new study is proof positive that even a modest dose of exercise is prescriptive for a mental health boost," he stated.

The BMI calculator helps you assess your weight indicating if it is normal or if you are underweight or overweight, based on your height.
Advertisement
Thirty adolescents aged 12-17 years old were randomized to twice weekly laboratory-based sessions of stationary cycling to music of their own choice or to an interactive video game of their own choice for a 10-week trial.

All exercise was supervised and performed at a light to moderate intensity. The music or interactive video game was used as a form of distraction from any perceived discomfort during the exercise, but participants could stop at their own choice at any time during a 60-minute session. The teens then self-reported on measures of psychosocial functioning, which includes: scholastic competence, social competence, athletic competence, body image, and self-esteem.

Although few physical differences emerged between the exercise groups over time, the teens did self-report improvements in perceived scholastic competence, social competence, and several markers of body image including appearance esteem and weight esteem.

According to Dr. Goldfield [citing related research], exercise induced improvements in body image, perceived social and academic functioning are psychologically empowering and may help buffer against some of the weight-based teasing and discrimination and bias that's often inflicted on obese kids, which can have devastating effects on their emotional well-being.

"If you can improve your physical activity and fitness even minimally, it can help improve your mental health. By teaching kids to focus on healthy active lifestyle behaviours, they are focusing on something they can control," he added.

The study was reported in the Journal of Pediatric Psychology.

Who wouldn't want to look fit in the current scenario where young and old are hitting the gym to look and feel fighting fit? We invite you to participate in this quiz on fitness and check if you are well informed on what it takes to remain fit all through your life.
Advertisement
<< Scientists Explore Link Between Alzheimer's Disease and Low...
Lethal Malaria-transmitting Mosquito Discovered >>

A walk in the park may lift the spirits of people suffering from depression, finds a study to examine the effect of nature walks in people with major depression by researchers in Canada and U.S.
Advertisement
News A-Z
A B C D E F G H I J K L M N O P Q R S T U V W X Y Z
What's New on Medindia