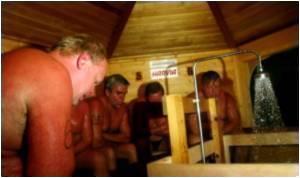 Stepping naked out of the sauna, steaming bodies walk purposefully towards a hole in the ice to plunge into the Baltic Sea. Minutes later they emerge lightheaded, savouring a typically Finnish high.

"It feels very good, and it's legal," says Jussi, as he admires the sunset, sitting naked on a bench after his freezing dip.

Experts Say Saunas Safe in Moderation, Lethal If Taken too Much

Experts say that hot steam in a closed room at the end of a harrowing day may be your idea of relaxation, but taking too much sauna may be lethal.
Advertisement


A few years ago, President Martti Ahtisaari, who went on to win the Nobel Peace Prize, was repeatedly called "Mr President" by a man just as naked and sweaty as himself.

Finns Get a Break from Stress in Saunas

People in Finland choose to kick back in a roasting hot room where the temperature can soar close to 100 degrees C (212 degrees F).
Advertisement
At first he did not react. Then he turned to him and said: "Are you talking to me? Nice to meet you, I'm Martti."

The anecdote perfectly illustrates the atmosphere at the Suomen Saunaseura, says president of the society Seppo Pukkila.

Pukkila is more than the president, owner or manager of a private club where double sponsorship is required to join. All importantly, he is also in charge of the temperature.

Six mornings a week, he fills the saunas' ovens with stacks of wood so that five hours later they they will reach the perfect temperature.

The two conventional chimney saunas are heated to between 60 and 80 degrees Celsius (140 and 180 degrees Fahrenheit.) Two smoke saunas -- which do not have a chimney to let out the smoke -- reach between 80 and 120 degrees Celsius.

Another one, also a smoke sauna sends the mercury soaring to between 120 and 150 degrees Celsius.

The Suomen Saunaseura's reputation is international and Pukkila recalls with delight a visit by US president George Bush: "his bodyguard had to go down in the cold water first to check that no one was hiding under the ice."

It's in winter that aficionados most enjoy the sauna and the freezing plunge into the Baltic.

"I brought a Mexican guy once. He was afraid of going into the water, but afterwards he said over and over 'I feel like Superman' and started doing push-ups."

In the dark wood sauna, its low ceiling covered in soot and lit up only by a sliver of pale spring light entering through a small window, the body sweats profusely.

It is helped by the fact that each newcomer to the wooden box pours water on the burning rocks atop the stove, provoking a sudden burst of burning moisture that "hits you like a hammer" according to Pukkila.

The staggering blow is welcomed with a "kiitos" (thank you) from all but the newcomer.

The post-dip relaxation hall is filled with silence. It has the hushed feel of a library.

For him "the best feeling is when you come out of the water: you feel in a daze."

Finland held onto its reign in 2008 Sauna World Championships by sitting in a piping hot sauna for longer than competitors from Belarus and Belgium.
Advertisement
<< A Thumb-Sized, $23 PC for School Kids - Coming Soon!
Europe Close to Giving the 'Viagra Condom' a Thumbs-Up >>

When it is warm and humid outside most people dream of being able to cool off by diving into a pool of cold water.
Advertisement
News A-Z
A B C D E F G H I J K L M N O P Q R S T U V W X Y Z
What's New on Medindia