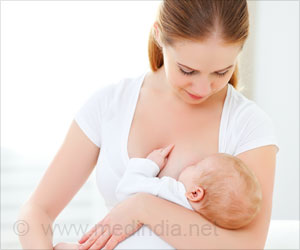 New research from WHO published at this month's European Congress on Obesity shows that babies who are never or only partially breastfed have an increased risk of becoming obese as children compared to babies who are exclusively breastfed. This WHO Europe research study was led by Dr. Ana Rito and Dr. Ricardo of the National Institute of Health, Lisbon, Portugal, and colleagues.


The research paper is part of the WHO Childhood Obesity Surveillance Initiative (COSI) led by Dr. João Breda, Head of the WHO European Office for Prevention and Control of Noncommunicable Diseases and his team and is being presented at the European Congress on Obesity (ECO) in Glasgow, UK.


‘Can exclusive breastfeeding protect your child from severe obesity? Yes, a new WHO study suggests that exclusively breastfed babies are less likely to suffer childhood obesity. However, the levels of breastfeeding across Europe are well off-target.’
Read More..


In the WHO European Region, despite childhood obesity rates in some regions apparently plateauing, progress on tackling this important public health issue remains slow and inconsistent. In scientific literature, breastfeeding has been described as a protective factor for obesity in childhood. The more exclusively and the longer a child is breastfed, the greater their protection from obesity. Higher birthweight has also been shown to be associated with later risk for obesity.

This new research investigated the association between early-life factors, namely breastfeeding, exclusive breastfeeding and birth weight, and obesity among children. The analysis included 22 participant countries from the 4th round (2015/2017) of the WHO COSI initiate. Data was collected using cross-sectional nationally representative samples of 6 to 9-year-olds, including 100 583 children.

For breastfeeding in general, the pooled analysis, which included 16 countries and 29,245 children, found a protective effect: compared to children who were breastfed for 6 months, children who were never breastfed were 22 percent more likely to be obese; whereas those who breastfed for less than 6 months were 12 percent more likely to be obese. Similar figures arose also for exclusive breastfeeding (which means that an infant received only breast milk and no other liquids or solids) based on data from 8 countries (15,371 children).

At the country level, statistical significance was found in 6 individual countries confirming this relationship with increased risks for obesity for never-breastfed children, compared to having been breastfed for 6 months: Montenegro (90%), Malta (69%), Croatia (62%), Georgia (53%), Spain (25%) and Italy (21%).

Regarding the association between obesity and characteristics at birth, the analysis revealed a 50 percent higher risk of being obese in case of preterm birth. Low birthweight was associated with a lower risk of future obesity by 35 percent, while high birthweight increased it by 9 percent. Despite the consistent flow of research evidence showing the health benefits from breastfeeding, along with numerous policy initiatives aimed to promote optimal breastfeeding practices, adoption of exclusive breastfeeding in Europe remains below global recommendation. This study showed that, while in nearly all countries, more than 77 percent of children were breastfed, there were exceptions -- in Ireland, France and Malta, 46 percent, 38 percent and 35 percent of children, respectively, were never breastfed. Only 4 out of 12 countries had a 25 percent or higher prevalence of exclusive breastfeeding (for 6 months or more), namely Georgia (35%); Kazakhstan (51%); Turkmenistan (57%) and Tajikistan (73%).

The authors say: "Considering that promoting breastfeeding presents a 'window of opportunity' for obesity policy prevention to respond to the problem of childhood obesity in Europe, the existence of national policies to promote breastfeeding practices and how these policies are developed, can lead some countries to be more or less successful. In general, breastfeeding practices in Europe fall short of WHO recommendations, due to inefficient policies to encourage breastfeeding; lack of preparation of health professionals to support breastfeeding, intensive marketing of breast milk substitutes, and problems in legislation on maternity protection, among others."

They conclude: "This study confirms the beneficial effect of breastfeeding with regard to the odds of becoming obese, which was statistically significant increased if children were never breastfed or breastfed for less than 6 months. Nevertheless, adoption of exclusive breastfeeding is below the global recommendations and far from the target to increase the prevalence of exclusive breastfeeding in the first 6 months up to at least 50% by 2025, a goal endorsed by the WHO's Member States at the World Health Assembly Global Targets for Nutrition".

Dr Breda adds: "WHO is working to promote, protect and support breastfeeding by strengthening monitoring systems that track progress of policies, programmes and funding towards achieving global targets, providing training and recommendations to healthcare workers (including measures in the 'Ten Steps to Successful Breastfeeding' recommendations), improving breastfeeding mothers' access to skilled breastfeeding counselling, and supporting countries in efforts to implement strong legal measures related to 'The International Code of Marketing of Breastmilk Substitutes', which aims to stop aggressive, inappropriate marketing practices."