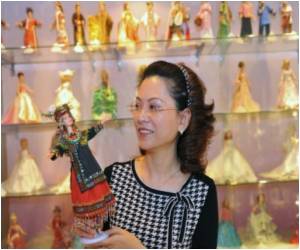 All of you would have read about "Little Red Riding Hood", she may have been heading to her grandmother's house -- but anthropologists wanted to know where she came from and just how her story spread.

By applying a mathematical model more commonly used by biologists to study the evolution of species, the researchers were able to create a sort of "evolutionary tree" for the popular folk tale, according to a new study out in the scientific journal PLOS ONE.

"The project, led by Jamie Tehrani, an anthropologist at Durham University, England, was able to show that 'Little Red Riding Hood' shares a common but ancient root with another popular international folk tale 'The Wolf and the Kids.'"


"This is rather like a biologist showing that humans and other apes share a common ancestor but have evolved into distinct species," Tehrani said.
Advertisement
"The Wolf and the Kids," which tells of a wolf that impersonates a nanny goat and eats her kids, apparently came first, originating in the 1st century AD. It is popular in Europe and the Middle East.

"Little Red Riding Hood," in which the big, bad wolf eats a little girl after disguising himself as her grandmother, diverged 1,000 years later.

The tale was one told by Germany's Brothers Grimm in the 1800s, but its roots trace back to oral stories passed down in France, Austria and northern Italy, Tehrani found.

And a number of variants of the story are told in Africa and Asia, including "The Tiger Grandmother," in Japan, China and Korea.

The process involves giving scores to each variable based on the likelihood they have a shared origin. These scores can then be used to craft a tree showing the most likely pathways by which the stories branched out.

"There is a popular theory that an archaic, ancestral version of 'Little Red Riding Hood' originated in Chinese oral tradition" before spreading west, Tehrani said.

But "my analysis demonstrates that, in fact, the Chinese version is derived from European oral traditions, and not vice versa," he said.

He said he is using the same technique on other folk tales and hopes the information could shed light on ancient human migration patterns.

New Light on Human Evolution Shed By Unique Skull
Nearly half a dozen species of our early human ancestor may have been all Homo erectus, suggests a ....