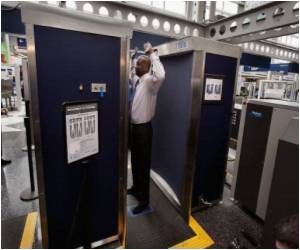 Are you already sick of intrusive airport security? Well, then be prepared to face the next generation of scanners.

A new technology being developed on behalf of the U.S. government will allow airport staff to scan every single molecule in our bodies.

Airport Security May Be Enhanced With New Facial-Recognition Software

With new advances in facial-recognition software, airport security workers might one day know with near certainty whether they're looking at a stressed-out tourist or staring
Advertisement

And the best thing is that travellers might not even know that they are being watched, as the device can be operated from a distance of 50 metres, the Daily Mail reported.


The Department of Homeland Security intends to use the Picosecond Programmable Laser scanners in airports, but as the device is small and light enough to be easily portable it could also be installed in any building or even on the street.

A prototype air sampling system aimed at efficiently and unobtrusively detect, amounts of explosives carried by airline passengers has been developed by US scientists.
Advertisement
As well as national security, the device could be used to everyday law enforcement - for example, it can detect even the tiniest quantity of drugs, such as the trace amounts of cocaine found on many banknotes.

According to the paper, an unidentified undersecretary at Homeland Security has predicted that the technology will be used within the next one to two years.

It is said that the new scanners would be ten million times faster and one million times more sensitive than the scanners used in airports and border patrols currently.

Gizmodo reports that the government subcontracted technology company In-Q-Tel to play the middleman between them and Genia Photonics, the company that has acquired 30 patents relating to the molecular-level scanners.

The company claimed that the Picosecond Programmable Laser scanner can 'penetrate clothing and many other organic materials and offers spectroscopic information, especially for materials that impact safety such as explosives and pharmacological substances.'

The scanner works by using lasers to evaluate the presence of any chemical traces on people or packages, and then that information is synched up to a computer attached to the small machine.

The process of scanning and downloading the information takes only picoseconds- so one-trillionth of a second- which means that security workers would be alerted to any alarming substances as you were approaching them.

It's a Deal! Best Airport Buys Across Europe

For airport shopping deals, Rome tops Europe's busiest airports, followed by Frankfurt and Berlin, but best buys for bags, perfumes or drink vary hugely from one hub to the next, a
Advertisement
<< US Warns of Surge In Meningitis Cases
Increase In Attempts to Quit Thanks To Graphic Anti-Smoking... >>