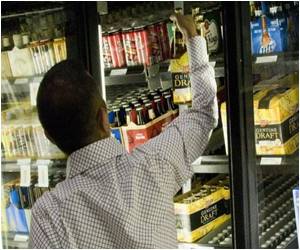 In fact, say the researchers in the group's latest publication, a number of factors - genetics, brain function and about 40 different variables - can help scientists predict with about 70 percent accuracy which teens will become binge drinkers. The study appears online July 3, 2014 as an Advance Online Publication in the journal Nature.

Binge drinking among the youngsters is a cause of concern and recent research seems to tell us just who could be prone to it.
Advertisement

First author Robert Whelan, Ph.D., a former University of Vermont (UVM) postdoctoral fellow in psychiatry and current lecturer at University College Dublin, and senior author Hugh Garavan, Ph.D., UVM associate professor of psychiatry, and colleagues conducted 10 hours of comprehensive assessments - these included neuroimaging to assess brain activity and brain structure, along with other measures such as IQ, cognitive task performance, personality and blood tests - on each of 2,400 14-year-old adolescents at eight different sites across Europe.


"Our goal was to develop a model to better understand the relative roles of brain structure and function, personality, environmental influences and genetics in the development of adolescent abuse of alcohol," says Whelan. "This multidimensional risk profile of genes, brain function and environmental influences can help in the prediction of binge drinking at age 16 years."

Drinking, Binge-Drinking and Marijuana  50pct of the USA Does It

More than half of Americans aged 12 and up drink alcohol, a quarter binge-drank in the past month, and one in 14 teens has used marijuana, a US government agency says in a report on substance abuse.
Advertisement
A 2012 Nature Neuroscience paper by the same researchers identified brain networks that predisposed some teens to higher-risk behaviors like experimentation with drugs and alcohol. This new study develops on that earlier work by following those kids for years (the participants in the study are now 19 years old) and identifying those who developed a pattern of binge-drinking. The 2014 Nature study aimed to predict those who went on to drink heavily at age 16 using only data collected at age 14. They applied a broad range of measures, developing a unique analytic method to predict which individuals would become binge-drinkers. The reliability of the results were confirmed by showing the same accuracy when tested on a new, separate group of teenagers. The result was a list of predictors that ranged from brain and genetics to personality and personal history factors.

"Notably, it's not the case that there's a single one or two or three variables that are critical," says Garavan. "The final model was very broad - it suggests that a wide mixture of reasons underlie teenage drinking."

Some of the best predictors, shares Garavan, include variables like personality, sensation-seeking traits, lack of conscientiousness, and a family history of drug use. Having even a single drink at age 14, was also a powerful predictor. That type of risk-taking behavior - and the impulsivity that often accompanies it - was a critical predictor. In addition, those teens who had experienced several stressful life events were among those at greater risk for binge-drinking.

One interesting finding, says Garavan, was that bigger brains were also predictive. Adolescents undergo significant brain changes, so in addition to the formation of personalities and social networks, it's actually normal for their brains to reduce to a more efficient size.

"There's refining and sculpting of the brain, and most of the gray matter - the neurons and the connections between them, are getting smaller and the white matter is getting larger," he explains. "Kids with more immature brains - those that are still larger - are more likely to drink."

Garavan, Whelan and colleagues believe that by better understanding the probable causal factors for binge-drinking, targeted interventions for those most at risk could be applied.

Gunter Schumann, M.D., professor of biological psychiatry and head of the section at the Social, Genetic and Developmental Psychiatry Centre, Institute of Psychiatry, King's College London, is the principle investigator of the IMAGEN study, which is the source of this latest paper. "We aimed to develop a 'gold standard' model for predicting teenage behavior, which can be used as a benchmark for the development of simpler, widely applicable prediction models," says Schumann. "This work will inform the development of specific early interventions in carriers of the risk profile to reduce the incidence of adolescent substance abuse. We now propose to extend analysis of the IMAGEN data in order to investigate the development of substance use patterns in the context of moderating environmental factors, such as exposure to nicotine or drugs as well as psychosocial stress."

In the future, the researchers hope to perform more in-depth analyses of the brain factors involved and determine whether or not there are different predictors for abuse of other drugs. A similar analysis, which is using the same dataset to look at the predictors of cannabis use, is planned for the near future.

Experts have claimed that more and more girls are binge drinking and - tired of being regarded as the passive sex - are emulating male behaviour.
Advertisement
<< Risk of Complications Higher Among Children Who Undergo Eme...
Japan Unveils Nursing Home for Aging Canines >>

New 'Whipped Cream With Alcohol' is the Latest Binge-drinking Tool!