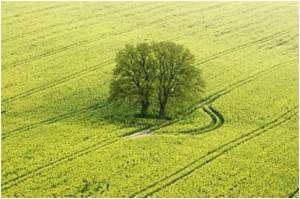 That's the conclusion of scientists who write in Trends in Plant Science, a Cell Press publication, based on case studies showing that the EU is undermining its own competitiveness in the agricultural sector to its own detriment and that of its humanitarian activities in the developing world.

"Failing such a change, ultimately the EU will become almost entirely dependent on the outside world for food and feed and scientific progress, ironically because the outside world has embraced the technology which is so unpopular in Europe, realizing this is the only way to achieve sustainable agriculture," said Paul Christou of the University of Lleida-Agrotecnio Center and Institució Catalana de Recerca i Estudis Avançats in Spain.


"Many aspects of the EU agricultural policy, including those concerning GMOs, are internally inconsistent and actively obstruct what the policy sets out to achieve," Christou and his colleagues continued.
Advertisement
For instance, the Lisbon Strategy aims to create a knowledge-based bioeconomy and recognizes the potential of GMOs to deliver it, but EU policy on the cultivation of GMOs has created an environment that makes this impossible. In reality, there is a de facto moratorium in Europe on the cultivation of genetically engineered crops such as maize, cotton, and soybean, even as the same products are imported because there is insufficient capacity to produce them by conventional means at home.

Subsidies designed to support farmers now benefit large producers at the expense of family farms, Christou says. The EU has also banned its farmers from using many pesticides and restricted them from other nonchemical methods of pest control, while allowing food products produced in the same ways to be imported.

"EU farmers are denied freedom of choicein essence, they are prevented from competing because EU policies actively discriminate against those wishing to cultivate genetically engineered crops, yet exactly the same crops are approved for import," Christou says.

All this, he says, despite the fact that GMOs must pass stringent safety tests and there has been no evidence of harm or health risks, despite more than 15 years of GMO agriculture around the world.

"We recommend the adoption of rational, science-based principles for the harmonization of agricultural policies to prevent economic decline and lower standards of living across the continent," the authors write. And that means short-term political expediency mustn't trump long-term objectives on challenges, including hunger and malnutrition.

Genetically Modified Crops Not a Solution to Poverty, Hunger or Climate Change
Experts have come to the conclusion that genetically modified (GM) crops are not a solution for ......

Greeks Put Their Foot Down on Genetically Modified Crops
The remote valley of Mesohori in northeastern Greece seems an unusual choice for a stand against ......

Genetically Modified Immune Cells may Help Treat Cancer
Fiver cancer patients experienced complete relief from their disease after being injected by their ....