In her workshop in Addis Ababa's Zenabework neighbourhood, a constant patter and the stench of glue fill the air as 40 cobblers hammer, trim tyres and stitch fabric to make the zero carbon emission footwear.

Soon, Eco-Friendly Fireworks To Save the Earth

A team of scientists is working on a new generation of eco friendly pyrotechnics that produce less smoke and use fewer toxic metals.
Advertisement 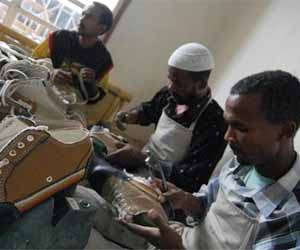 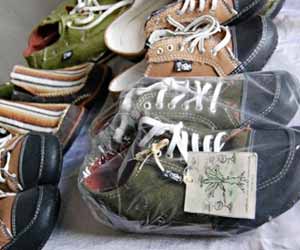 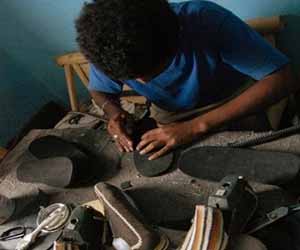 Launched in 2005, the SoleRebels brand features trainers, sandals and other trendy open shoes which are sold in the United States and Europe. It also provides livelihoods to at least 75 suppliers.


"For a long time, used tyres have been used here to make traditional sandals, so I decided to take the idea and develop it in Ethiopian traditional factories using organic cotton and local leather," the 30 year-old entrepreneur said.

Brewing engineers from the Technische Universitaet Muenchen (TUM) in Germany are trying to literally make a 'green' beer, which during brewing, would allow energy savings of up to 20 percent.
Advertisement
The brand gets its name from the type of footwear favoured by Ethiopian rebel fighters in the country's recent troubled past.

Africa's second most populous country after Nigeria, with nearly 80 million inhabitants, Ethiopia is also one of the continent's poorest nations, with bouts of drought, famine, the overthrow of a junta in 1991 and a bloody border war with Eritrea in the 1990s that left 80,000 dead exacerbating economic woes.

"When I was young we were at war and rebels wearing that kind of sandals with used tyre soles were giving hope to people," said the youthful shoemaker and mother of two.

The shoes are wholly handmade and the workshop can produce up to 500 pairs of sandals, or 200 pairs of shoes -- priced between 15 and 30 dollars -- daily, exclusively for export.

"We are confident that SoleRebels has the potential to become Africa's Timberland, Adidas or Nike," she said.

Huge talent and lack of employment in the Horn of Africa country means that SoleRebels has no trouble recruiting its workforce. Added to that is the fact that the firm pays its workers nearly four times Ethiopia's average monthly wage.

The workshop has also encouraged employees to create their own businesses from skills developed during their stint at SoleRebels, Bethlehem said.

"I noted there was a lot of talented people but no opportunity for work. I grew up in this community, I know how they suffer... When we say we want to change people's lives, we have the obligation to give them a good salary."

Gesachew Sherefa, a 27-year-old supervisor, proudly counts benefits such as health insurance for his family as advantages unheard of in other artisanal enterprises.

"I get 3,000 birr (240 dollars) per month... If I could work here my whole life it would be very nice because here there is stability and security," he said.

For single mother Webayu Legasse, employment at SoleRebels is nothing short of a revolution.

"Conditions are much better here than in the association where I was working before," she explained.

"I was earning only 350 birr a month and I could not survive, so after my work I had to go from house to house to wash and iron people's clothes."

Replacements for petrochemical fuels that will be cost-competitive and renewable while having a minimal impact on the environment are on the anvil
Advertisement
<< Ballesteros Tells Fans Not to Feel Sorry for Him Over Brain...
Donated Pacemakers Survive Do Not Cause Complications in Pa... >>

Owing to a rather 'ironical' ad campaign, an Amsterdam hotel, which claimed to be 'the worst hotel in the world', has become a huge hit with travelers in the city.