Ethical Judgment Clouded Even in the Highly Religious by Narcissism 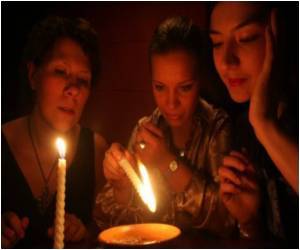 While extreme narcissism can impair ethical judgment immaterial of one's religious orientation or orthodox beliefs, it is riskier in those who might be expected to be more ethical, claims new study.

"Devout people who are narcissistic and exercise poor ethical judgment would be committing acts that are, according to their own internalized value system, blatantly hypocritical," Marjorie J. Cooper, study author from Baylor's Hankamer School of Business, said.


"Narcissism is sufficiently intrusive and powerful that it entices people into behaving in ways inimical to their most deeply-held beliefs," Cooper said.
Advertisement
Skeptics largely reject foundational . Nominal Christians are moderate in their intrinsic religious orientation as well as in their orthodox beliefs. Devout Christians are high in intrinsic religious orientation and orthodoxy, which indicates that they fully internalize Christian beliefs and values.

"We found that nominal and devout Christians show better ethical judgment than the skeptics overall, but especially those whose narcissistic tendencies are at the low end of the spectrum," Chris Pullig, chair of the department of marketing and associate professor of marketing at Baylor, said.

"However, that undergoes a notable alteration as levels of narcissism rise for subjects within each cluster.

"Both the nominal and devout groups show degrees of poor ethical judgment equal to that of the skeptics when accompanied by higher degrees of narcissism, a finding that suggests a dramatic transformation for both nominals and the devouts when ethical judgment is clouded by narcissistic tendencies," he said.

For the skeptics, the range of scores for ethical judgment from low to high lacks the range that is found for the nominals and devouts. Increased narcissism among skeptics does not result in significantly worse ethical judgment.

"However, the same cannot be said for the nominals or the devouts," Cooper said.

For the study, 385 undergraduate marketing students completed an online survey in which they indicated to what degree they believe behaviour was acceptable or not for various statements.

The statements included "an underpaid executive padded his expense account by about 3,000 dollars a year", "a company paid a 350,000 dollar 'consulting' fee to an official of a foreign country. In return, the official promised assistance in obtaining a contract that will produce $10 million profit for the contracting company."

They were also asked how strongly they agreed or disagreed with statements like "I go to church mostly to spend time with my friends", "my whole approach to life is based on my religion", and "although I believe in my religion, many other things are more important in life."

The Diagnostic and Statistical Manual of Mental Disorders, DSM-IV, published by the American Psychiatric Association (2000), defines narcissistic personality disorder (NPD) as someone whose behaviour is fittingly described by five of nine characteristics.

These characteristics include - an exaggerated sense of self-importance, fantasies of extraordinary success, power, brilliance, beauty, or ideal love, belief that one is "special" and should only associate with and can only be understood by other high-status people, demand for excessive admiration from others, a sense of entitlement, objectification of others to achieve personal ends and gratification, lack of empathy, envy of others or belief that others are envious of oneself, haughty, arrogant, patronizing, or contemptuous behaviour or attitudes toward others.

The study has been published online in the Journal of Business Ethics.

Source: ANI
Advertisement
<< Kids With ACL Injuries Could Face Irreparable Meniscus Tears...
Tweens on the Fence on Cigarettes and Alcohol >>

Religion Can Dictate Whom You Trust and Whom You Don't
Religious people have more trust in authority, while those with moral convictions feel ......

Study Finds Religion Heading to Extinction in 9 Countries
Religion is set for extinction in nine countries, says a new study....

Paediatric Oncologists Turn to Religion in Times of Medical Crisis
Paediatric oncologists are likely to accept religion as a resort when medicine has failed the ......