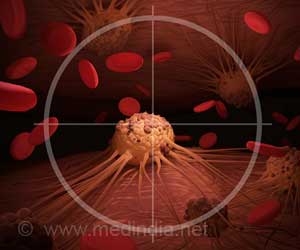 New treatment methods can be developed, as estrogen therapy and overexpression of estrogen receptor cause neuroblastoma cells to mature into neuron-like cells.

In laboratory experiments, the research team at Karolinska Institutet in Sweden demonstrate the results. The study was published in PNAS.

The female sex hormone estrogen can perform an important role in neuroblastoma, a form of cancer mainly affecting young children.


Neuroblastoma forms in the peripheral nervous system and is one of the most common forms of solid cancer in young children.

The disease mainly affects babies and young children, and while in some cases the tumours can disappear of their own accord, the majority are aggressive, metastasising cancer tumours that are resistant to modern combinations of surgery, radiotherapy and intensive chemotherapy.
Advertisement
The most aggressive forms of neuroblastoma are often associated with a more active MYCN gene, which drives tumour cell growth and spread and inhibits the maturation of the cells.

"Our research focuses particularly on the activity of this gene and how it relates to neuroblastoma," says Professor Marie Arsenian-Henriksson at the Department of Microbiology, Tumour and Cell Biology, Karolinska Institutet.

"MYCN is often seen only as a marker for a poor prognosis, but it's critical to the disease and is a possible target for new drugs."

In a previous study, her group discovered that activation of MYCN results in the formation of specific microRNAs, which are relatively small RNA molecules that regulate proteins. Some of these microRNAs disable the estrogen receptor ERalpha.

The present study shows that the inhibition of these microRNA molecules or estrogen therapy in combination with an overexpression of the estrogen receptor can cause aggressive neuroblastoma cells with MYCN activation to mature into neuron-like cells which behave more like normal cells.

The researchers studied tumour tissue from patients, cultivated human tumour cells and tumours in mouse models for neuroblastoma. In the mice, the neuron-like cells did not grow as quickly as the original cancer cells, and analyses of the tumour tissue from patients show that those with a high level of the estrogen receptor have a better survival rate that those with a low.

Estrogen Dominance
Estrogen dominance is a condition with relatively high levels of estrogen and diminished ......

Hormonal Imbalance
Hormone imbalance - These signs and symptoms can be a red alert. Too much or too little of your body...