Healthy young mice treated with erythropoietin show lasting improved performance in learning and other higher brain functions. Researchers writing in the open access journal BMC Biology tested the cognitive effects of the growth factor, finding that it improved the sequential learning and memory components of a complex long-term cognitive task.

Hannelore Ehrenreich led a team of researchers from the Max Planck Institute of Experimental Medicine in Göttingen, Germany, who studied the mice. She said, "Erythropoietin has been in clinical use for over 20 years to treat patients with anemic conditions, ranging from renal failure to cancer. It has recently received attention for its apparent ability to improve cognitive function in people with schizophrenia and multiple sclerosis. Here, we sought to investigate erythropoietin's effects in healthy mice".


Ehrenreich and her colleagues tested the effects of erythropoietin on the ability of the mice to learn how to exploit an experimental set-up to receive sugared water. Over a series of learning stages, the mice were trained to get their treat by poking their noses into holes lit by LEDs, rather than into unlit holes, within a time limit.


The mice that had been treated with recombinant human erythropoietin were significantly more likely to master the task than those that had not. According to Ehrenreich, "Treated mice showed superior performance in associative, operant and discriminant learning as well as in the initial training phases. Moreover, erythropoietin-treated mice demonstrated better task adaptation and higher performance stability".

Erythropoietin
This medication is a haematopoietic agent, prescribed for anemia in people with chronic kidney ...
READ MORE

Can a Sports-cheat Drug Improve Memory Functions?
A banned drug used by athletes for performance enhancement has been found to improve memory, say a group of researchers.
READ MORE 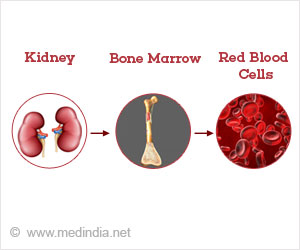