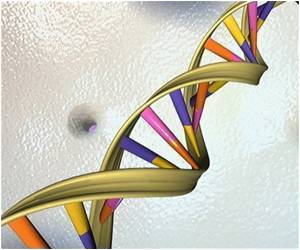 The precise function of an enzyme critical for normal muscle structure which is also involved in several muscular dystrophies has been figured out by researchers at the University of Iowa. The findings, which were published Jan. 6 in the journal Science, could be used to develop rapid, large-scale testing of potential muscular dystrophy therapies.

The enzyme, called LARGE, adds a critical sugar chain onto an important membrane protein called dystroglycan. This sugar chain acts like a glue allowing dystroglycan to attach to other proteins and by doing so, reinforce cell membranes in many tissues including muscle and brain. Dystroglycan does not function properly without this sugar link, and that malfunction causes muscular dystrophies and brain abnormalities.

"LARGE is a critical enzyme involved in maintaining muscle cell viability," says Kevin Campbell, Ph.D., professor and head of molecular physiology and biophysics at the UI Carver College of Medicine and a Howard Hughes Medical Institute investigator. "It adds on a unique sugar chain that allows the muscle cell to protect its membrane from injury. By figuring out the function of this enzyme we've finally identified this critical sugar link."


The new study shows that the enzyme activity of LARGE has two specific sugar-adding functions -- it transfers the sugars xylose and glucuronic acid. Using nuclear magnetic resonance analysis (NMR), the team was also able to determine the precise structure of the sugar chain produced by LARGE, which has not been seen before.

Detailed information on myotonic muscular dystrophy, a common form of muscular disease that affects adults and children.
Advertisement
The study confirmed that this unique sugar chain is responsible for dystroglycan's ability to attach to its protein partners, which include laminin in muscle and neurexin in brain.

In addition to LARGE, several other enzymes are involved in building the important dystroglycan sugar chain, and mutations in all these enzymes cause congenital muscular dystrophies collectively known as secondary dystroglycanopathies. These disorders include Fukuyama Congenital Muscular Dystrophy, Walker-Warburg Syndrome, Muscle-Eye-Brain disease, Congenital Muscular Dystrophy 1C and 1D, and limb-girdle muscular dystrophy 2I.

However, in all cases, the part of the sugar chain that is critical for dystroglycan function is the part that is added by LARGE. Furthermore, work from Campbell's lab has shown that boosting LARGE activity in cells from patients with these types of muscular dystrophies is sufficient to restore dystroglycan function and overcome the defects in the cells.

By understanding what the LARGE enzyme does, the researchers have now been able to develop a test, or assay, to monitor enzyme activity.

"It's exciting that we now have this enzyme assay, which could be used in a large-scale high-throughput screen for drugs that increase (or decrease) LARGE activity," Campbell says.

Using the assay to identify compounds that boost LARGE activity might lead to potential treatments for the secondary dystroglycanopathies. The assay could also be used to look at variations in LARGE activity in patients' cells. This may help identify patients who are affected by these LARGE-related muscular dystrophies.

LARGE activity is important in other diseases

The unusual sugar chain that LARGE builds onto dystroglycan is also implicated in other diseases. A group of viruses that includes Lassa fever appear to require the sugar chain to infect cells. Lassa fever is a hemorrhagic illness that can cause serious disease and death.

Now that the researchers have determined the make-up of the unusual sugar, Campbell suggests that it will be possible to make and test it as a therapeutic to block or reduce infection by these viruses.

Health Minister of Sierra Leone, Soccoh Kabia, said on Thursday that Medical and aid official in the country are preparing for an anticipated outbreak of Lassa fever.
Advertisement
<< Insulin Therapy Likely to Mend Atherosclerotic Lesions in Di...
Basis for Custom-made Medicine Lends Hope to Prevent and Tre... >>

More News on:
Muscular Dystrophy Genetic Testing of Diseases Food Preservatives - How Safe Are They? Dysarthria

Sanatogen Calculate Ideal Weight for Infants Color Blindness Calculator Daily Calorie Requirements Drug Side Effects Calculator Loram (2 mg) (Lorazepam) Hearing Loss Calculator The Essence of Yoga Nutam (400mg) (Piracetam) Iron Intake Calculator
This site uses cookies to deliver our services. By using our site, you acknowledge that you have read and understand our Cookie Policy, Privacy Policy, and our Terms of Use