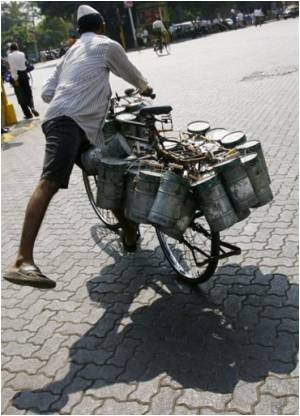 Mumbai's lunchbox delivery men who became famous after business leaders and royalty turned the spotlight on them, are building up their image by working on their skills.

Courses in English and computer skills are to be offered to the 5,000 or so "dabbawallahs" who criss-cross the city every day delivering home-cooked meals to hungry office workers, the Press Trust of India news agency reported.

The vice-chancellor of Yashwantrao Chavan Open University, R. Krishnakumar, was quoted as saying Tuesday that the courses, which will run near the dabbawallahs' central Mumbai base, will allow them to "improve their lot".


Most of the delivery men, who are often barefoot and cut distinctive figures on Mumbai's streets in their white cotton uniforms and Nehru caps, are school dropouts who speak only the local language Marathi or Hindi.
Advertisement
A lack of formal education, English or computer skills has not hindered their ability to deliver a near flawless service to at least 200,000 people every day, winning them plaudits around the world.

Forbes magazine once awarded them a "six sigma" rating, meaning that they have an error rate as low as one per one million deliveries, putting them alongside some of the top businesses in the world.

The tiffin (lunch) deliverers have attributed their success to effective time management and responding to customer feedback.

Fans of the dabbawallahs, who use trains, handcarts and bicycles to deliver the steel tiffin boxes using a complex colour-coded system and 10-digit alpha-numeric code, include the Virgin Group tycoon Richard Branson.

Britain's Prince Charles, who met the delivery men on a visit to India, also invited two dabbawallahs to his wedding to his second wife, Camilla Parker Bowles in 2005 after they sent the couple a wedding present.