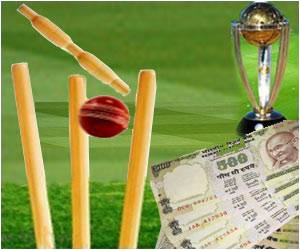 England off-spinner Mike Yardy was compelled to fly home from the World Cup earlier this year owing to depression. He said that he felt he was in danger from the debilitating illness.

The Sussex captain, who this week signed a new contract that keeps him at Hove until 2014, shocked the cricketing world and the majority of his team-mates by leaving Colombo three days before the World Cup quarterfinal against Sri Lanka.

The daily Mail quoted Yardy as saying: "What you've got to remember is that anyone can get it (depression). It can be people under pressure to pay the bills and things like that or someone who appears to have everything."


He said: "I wasn't enjoying life. Everything was a real struggle. I couldn't understand why I was in such a bad place because everything seemed to be going quite merrily from the outside. I was a World Cup winner, I was playing for a very successful England team and Sussex were playing really good Twenty20 cricket."

Adolescent depression is an ailment that occurs during the teenage characterized by persistent melancholy, disappointment and loss of self-esteem.
Advertisement
"Everything I had worked for in my professional life was going well and my family life was great and you are thinking, 'What are you doing? Snap out of it, this is ridiculous,'" he said.

"At the end of the season, I woke up one day and thought, "I can't get out of bed. It got to the stage where I couldn't cope any more. I would be in my room pulling my hair out," said Yardy.

Everyone within the England and Sussex set-ups were totally supportive but instead of taking a proper break, he rushed back to play with his county too early, feeling he needed to 'prove a point' and soon had to take another break from the sport.

Yardy, married with two children, came off the pitch midway through a game against Middlesex at Hove last summer, struck by a sense that he was in 'danger' on the field.

Yardy feared he would never be able to play again but looked to other sporting stars who had come through their depressive illnesses for inspiration, and now even dreams of playing in the national Twenty20 side again.

He now gets the professional help and support he needs to manage his condition, keeping a diary to monitor his changing moods and recognizing the signs when the depression is creeping back.

Depression is a common disorder and many worldwide suffer from depression. Early recognition of symptoms and signs of depression can help in taking a holistic approach to the management of depression.
Advertisement
<< Micro-robots in Blood Stream Expected to Kill Tumours, Blood...
Duchess Kate as Pregnant Doll in Markets Soon >>

Selfie Addiction Calculator Find a Hospital A-Z Drug Brands in India Daily Calorie Requirements Drug Interaction Checker Accident and Trauma Care Hearing Loss Calculator Blood Donation - Recipients Blood - Sugar Chart Find a Doctor
This site uses cookies to deliver our services.By using our site, you acknowledge that you have read and understand our Cookie Policy, Privacy Policy, and our Terms of Use  Ok, Got it. Close
×