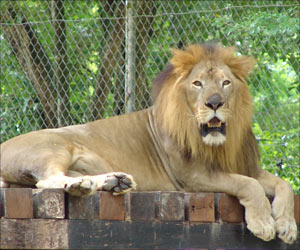 The population of Asiatic lions in Gujarat, India has increased to nearly 500. The Gir Forest National Park in Gujarat is one of India's oldest wildlife sanctuaries and is the sole home of Asiatic lion.

Those involved in the census said that the population outside the Gir sanctuary also had risen substantially and the number of sightings of the lions was very encouraging. The census has shown an increase of 15-22% this year compared to the last five years.
Advertisement

Forest department officials said that the number of cubs in the age group of 0-3 was sighted in good numbers. "This was because the sanctuary was saturated and had more lions than its carrying capacity. According to a study, the carrying capacity of sanctuary and the national park was around 250 lions and cubs but around 290 lions were estimated to be there in Junagadh and Sasan Gir Sanctuary," said an official.


Amreli, Bhavnagar and even coastal areas were the habitats for most of the big cats. The officials said that the 2010 census had shown that the number of lions outside the sanctuary in the coastal areas, Amreli and Bhavnagar was only 114. Sources in the government said that some new areas may be added to those where the lions are currently known to exist.

For Conservation Efforts Endangered Lemurs' Complete Genomes are Sequenced and Analyzed
In an effort to help guide conservation efforts the complete genomes of three separate populations ....

Poisoned Endangered Species of Vulture Saved from Death
Mobile Veterinary Service and the Assam forest department helped a team of wildlife conservers to .....