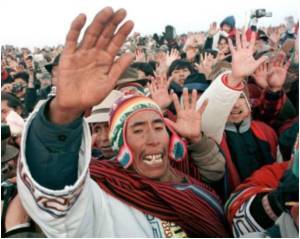 Bolivians are calling for a change in a 1961 UN convention to remove a ban on a practice that has been part of indigenous cultures here for millennia.

Protesters gathered outside the US embassy in La Paz to chew the leaf as part of a day of demonstrations around the country celebrating the coca plant and demanding that the UN Single Convention on Narcotics Drugs be amended.

The United States has said it would oppose the Bolivian proposal, calling the 50 year old convention "an important tool in the global struggle against narcotics trafficking."


The agreement designates the coca leaf as a narcotic, and calls on countries to eradicate coca leaf chewing.

Bolivian Foreign Minister David Choquehuanca has been visiting European capitals, seeking support for the amendment. The United Nations has until January 31 to decide whether to change the treaty.

Accident and trauma care is an important public health challenge that requires immediate attention. Injury (trauma) is the leading cause of death for all age groups under the age of 44.
Advertisement
"The countries support us so that we can de-penalize (coca chewing); the only one opposing us is the United States," said Leonilda Zurita, a coca grower and a leader of the ruling Movement Toward Socialism party.

In city plazas, participants chewed coca leaves, a practice known as "acullico" in the Aymara language, or "pijcheo" in Quechua.

The coca leaf (Erythroxylum coca) is part of everyday life for people in the Andean region. An estimated seven million people in a region stretching from southern Colombia through Ecuador, Peru, Bolivia, northern Chile and Argentina chew coca leaves, as did their ancestors going back many generations.

Known for its stimulating and blood oxygenation properties, the little green leaf is loaded with vitamins and 14 alkaloids.

President Evo Morales rose to power as the leader of a coca growers' union.

And since 2009, Bolivia's constitution describes coca as a "cultural heritage, a renewable natural resource" and a key biodiversity element that helps maintain "Bolivian social cohesion."

The US embassy, in a statement reaffirming US opposition to the proposed amendment to the UN convention, said it was willing to work with the Bolivian government "out of respect for these millennial practices."

Alcohol abuse
Advertisement
<< Cholera Vaccines can Help Even After an Outbreak Starts: St...
Mediator of Blood Pressure Regulation in the Liver Identifi... >>

How to Reduce School Bag Weight - Simple Tips Indian Medical Journals Post-Nasal Drip Pregnancy Confirmation Calculator Accident and Trauma Care Selfie Addiction Calculator Drug Side Effects Calculator Blood Donation - Recipients Find a Doctor Color Blindness Calculator
This site uses cookies to deliver our services.By using our site, you acknowledge that you have read and understand our Cookie Policy, Privacy Policy, and our Terms of Use  Ok, Got it. Close
×