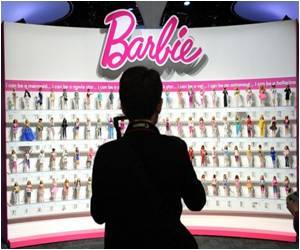 Once more, Barbie is running for US president, only this time in a pink power suit from a New York designer whose clients include Michelle Obama the manufacturer of the iconic doll said on Wednesday.

Mattel said its "Barbie I Can Be... President" doll -- developed in collaboration with the White House Project, a women's leadership development organization -- is intended "to plant the seed of leadership in a girl's mind."

Its pink outfit with patriotic red, white and blue trim and matching pink wedge shoes is the work of New York fashion designer Chris Benz, whose formal wear is favored by the First Lady for glittering gala events.


"I was so excited to jump into the playful world of American fashion design ... for such an iconic customer," said Benz in a Mattel statement. "It was very important for the outfit to convey professionalism and strength in silhouette and design."

Experts have warned that the demand for latest gadgets and fashion-based entertainment by tech savy girls is steadily pushing dolls to their grave.
Advertisement
Mattel previously released Barbie-for-president dolls during the 1992, 2000, 2004 and 2008 election campaigns. The latest version will be in stores this summer "in Caucasian, African American, Hispanic and Asian ethnicities."

On Tuesday, a spokesman for Mattel said it would release a "friend of Barbie" doll next year that is bald in support of children who have cancer and lose their hair in treatment.

A Mattel spokesman has revealed that the company is planning to release a doll next year that is bald.
Advertisement
<< Compound Crafted To Attack Malaria-Causing Bug
Risk of Retinal Detachment Increased by Oral Use of Antibio... >>

Tougher US regulation of chemicals suspected of being behind a rise in childhood cancers has been urged by a mom whose four-year-old died after losing a battle to a brain tumor.
Advertisement
News A-Z
A B C D E F G H I J K L M N O P Q R S T U V W X Y Z
What's New on Medindia