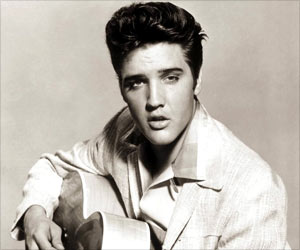 Elvis Presley's unhealthy diet is found to be the reason behind the singer's untimely death as he was not in good shape.

A leading pathologist revealed in Channel 5 show 'Autopsy: The Last Hours Of Elvis' that the singer was so overweight and unfit his death at the age of 42 in 1977 was inevitable and he drank a litre of spirits a day and took up to nine prescription drugs, the Daily Express reported.
Advertisement

British forensic pathologist Dr Richard Shepherd asserted that the singer's heart and liver were twice normal size and his hair would have been "snow white" had he not dyed it.


Shepherd added that Presley was not in good shape and weighed 15st 10lb.

Elvis was found face down in the bathroom of his mansion at Graceland in Tennessee after he collapsed and fell at about 7am while his fiancee and staff slept.

Faith in Elvis Kept By Teen Fan
A girl like Isabella Scott demographically speaking ought to be obsessed with the likes of Justin .....

Almost a Third of World Population is Overweight
A new study has found that nearly 30 percent of the world's population or almost 2.1 billion people ...

Dining With Overweight Individuals Makes You Eat Unhealthy Food
Eating with friends who are overweight can influence you to eat more unhealthy food items....