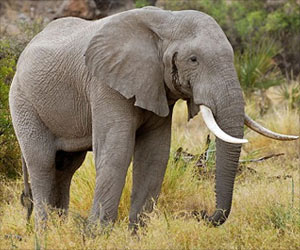 Elephants appear to be resistant to cancer than humans, as the giant animals have more copies of a gene that suppresses tumor growth, says a new study.

A team of researchers, led by pediatric oncologist Dr. Joshua Schiffman, have discovered a gene in the giants of the animal world that could hold a key to preventing cancer in humans. It lies in a tumor-blocking gene TP53.

This mechanism may help predict who are most likely to benefit from immunotherapies, promising new drugs that enlist the immune system to fight cancers.
Advertisement

The researchers said that how this gene evolved and works may help researchers develop ways to treat cancer in humans.


The gene encodes a protein that kills a cell if the DNA of that cell is damaged and prevents it from becoming cancerous.

"The gene, TP53 encodes a protein that suppresses tumors. In the majority of human cancers, this gene is mutated, leading to increased cell reproduction (a hallmark of cancer) and genomic instability (mutations in the genome)," said the researchers.

Automated droplet-based surface sampling probe analyzes cancerous tissue sample within 10 minutes, which usually takes 20 to 30 minutes in traditional methods.
Advertisement
The researchers said the humans have only two such genes - one inherited from father and one inherited from mother.

Schiffman describes TP53 as the "guardian of the genome," scanning cells for genetic mistakes and destroying ones that can't be fixed.

Researchers hope that this will open a pathway to finding a way to prevent cancer in humans.