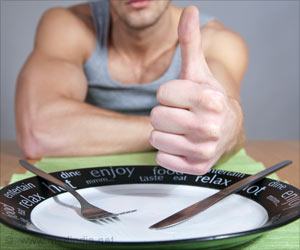 How would it be if you could eat all the sugar you want but still don't put on more weight? This might come true as scientists developed a device which makes low-sugar food taste sweeter.

The invention - dubbed Taste Buddy - emits a low-level electrical current to stimulate taste buds so the mouth perceives sweet or salty flavours, even when they are not really present.

Most of us are tempted by good food, mealtime or not. Once in a way is fine but it is dangerous to give into food cravings all the time.
Advertisement
‘The Taste Buddy could eventually help save lives, by allowing people to switch to healthier food choices.’

It is being developed by scientists at the University of London, led by Prof Adrian Cheok, who unveiled the gadget at the The Big Bang UK Young Scientists & Engineers Fair, in Birmingham.


The device could eventually be engineered to fit within everyday utensils such as cutlery, cups and cans and the team has already begun working on a prototype spoon.

A loss of appetite deprives an individual of essential nutrients and results in weight loss.
Advertisement
Prof Cheok said with further development it could be used to allow people to taste something they enjoy while eating a healthy dish, for example making tofu taste like steak or vegetables like chocolate.

"What started out as a fun engineering experiment has now led to something much more exciting with the potential to have a positive social impact," said Dr Cheok, professor of pervasive computing."

"Many children hate the taste of vegetables. So I knew that when I became an engineer, I wanted to make a device that could allow children to eat vegetables that taste like chocolate."

The invention exploits the chemical reactions happening in the mouth when we eat. Sour and salty tastes are recognised when taste receptors on the tongue detect the reaction between saliva and the acidity of hydrogen or sodium. Using electrical stimulation the team has found a frequency which artificially simulates the reaction.

"Just like the microchip, we're hoping to make the taste buddy smaller and smaller, to eventually fit within cutlery, fizzy drink cans, utensils and cups, and to be powered by a bluetooth device, to choose the levels of taste you'd like."

The team say that they are also working on producing different tastes which they claim is time consuming because even the difference between a lemon and a lime is vast.

"We also want to take into consideration just how different everyone's sense of taste is, added Mr Karunanayaka. "For instance, we know that people who eat lots of spicy food, or people who smoke, have less sensitive taste, and therefore need a higher thermal and electrical current to create the taste. To make it robust enough and available to absolutely everyone, we need to do more work."