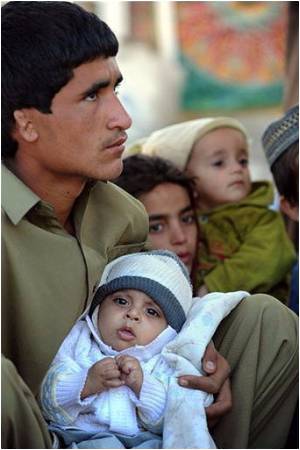 As millions still languish without shelter after the nation's worst-ever floods Pakistani Muslims on Saturday took part in low-key celebrations for the Eid al-Fitr festival.

Eid is the most important festival in the Islamic calendar -- marking the end of the fasting month of Ramadan -- but celebrations were muted Saturday as the fallout from devastating floods continues.

The deluges have left 10 million people without shelter nationwide, according to UN figures, with UN spokesman Maurizio Giuliano describing it as "one of the worst humanitarian disasters in UN history."


Some 21 million people have been affected by the floods, which began more than six weeks ago and have dragged on through Ramadan, with more than eight million reliant on aid handouts for survival.

"We cannot celebrate the day with traditional fanfare and festivities when millions of our countrymen have been rendered shelterless as villages, towns and cities have been destroyed by the floods," Zardari said.

He said: "We bow our heads in gratitude to Allah on this day for blessing us with the bounties of the holy month of Ramadan."

"For the Muslims it is a thanksgiving day and I wish to greet all Muslims of the world on this occasion."

In his message, Prime Minister Gilani said: "This year's Eid festival is being celebrated on such a moment of history, when a large part of country is under the devastation caused by pre-Ramadan floods."

"Millions of fellow countrymen are homeless and facing severe difficulties."

He said the nation had demonstrated come together with generosity to lessen the hardship faced by the flood victims.

"No doubt, brave nations face the challenges with courage and mettle," he said.

Gilani will celebrate Eid with flood affected people in different camps all over the country on Saturday and Sunday, an official statement said.

The floods inundated vast swathes of Pakistan and killed 1,760 people but disaster officials have said the number of deaths is likely to rise "significantly" when the missing are accounted for.

Global cash pledges have been slow coming to bolster rescue and relief efforts and the UN warned it could impede relief operations as Pakistan faces a triple threat to food supplies -- with seeds, crops and incomes hit.

Advancing floodwaters continue to threaten parts of Sindh province, with 19 of its 23 districts deluged and 2.8 million people displaced, according to provincial authorities.

The most vulnerable victims of the nation's worst-ever natural disaster are six million children, who are suffering from Pakistan's devastating floods: lost, orphaned or stricken with diarrhoea.
Advertisement
Advertisement