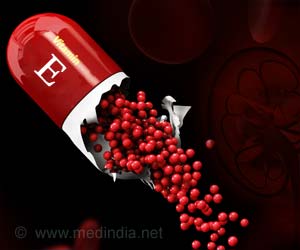 The role of taking Vitamin E supplements in affecting the risk of cancer investigated through clinical trials. Vitamin E increased or decreased the risk of cancer development due to genetic variations in the COMT gene, during and after the study period. The research published in The Journal of the National Cancer Institute.

Almost half of all Americans take a vitamin supplement, and yet many large-scale, placebo-controlled clinical trials of various supplements have found little or no benefit. A new study led by investigators from Brigham and Women's Hospital suggests an intriguing reason for this: genetic variation may be influencing these effects, increasing risk in some individuals while decreasing risk for others. Investigators conducted a retrospective analysis of the Women's Health Study (WHS) and its genetic component, the Women's Genome Health Study (WGHS), as well as validated their results in the Alpha-Tocopherol Beta-Carotene Cancer Prevention Study (ATBC).
Advertisement
‘Women taking Vitamin E supplements with the met-met variant of the COMT gene had a lower incidence of cancer compared to women with the val-val variant of the gene having a higher risk of the disease.’

"Observational studies of people taking vitamin E have reported benefits, and studies in animal models have suggested a protective effect, but when vitamin E supplements were brought into placebo-controlled clinical trials, the results were null," said Kathryn Hall, PhD, MPH, from the Division of Preventive Medicine at the Brigham. "This made it easy to assume that vitamin E just doesn't work. But what we've found is that it may have been protective in some and not in others, and that genetic variation is linked to these outcomes."


Multiple pathways may link the enzyme catechol-O-methyltransferase (COMT) to how vitamin E is processed by the body. Hall and colleagues previously found that genetic differences in COMT modified the effects of vitamin E on cardiovascular disease risk.
Advertisement
The most extensively studied variant in COMT comes in three genetic "flavors": met/met, val/met and val/val. People with the val/val variant have a version of COMT that is 3-4 times more enzymatically active than people with met/met.

Hall and her co-authors, including colleagues from the Division of Preventive Medicine - Nancy Cook, ScD, Julie Buring, ScD, Howard Sesso, ScD, and Daniel Chasman, PhD - as well as Paul Ridker, MD, director of the Center for Cardiovascular Disease Prevention, looked at cancer rates among women during the WHS/WGHS trial, which lasted 10 years, plus the 10 years immediately following the trial's conclusion. They found that in the overall period, for women with the met-met variant who took vitamin E compared to placebo, rates of total cancer were 14 percent significantly lower, while they were 15 percent higher for women with the val-val variant who took vitamin E compared to placebo.

Participants in the WGHS were all female health care professionals in good health at the beginning of the trial. The researchers validated these results by looking at a second cohort. Similar results were seen in the ATBC trial, led by Demetrius Albanes, MD, MPH, of the National Institutes of Health, which included only male smokers from Finland.

"Significant gene-drug interactions are hard to find, and this one is particularly striking. Now we need to understand which cancers are affected, why and how, and these results encourage us to pursue this with robust and rigorous curiosity," said Hall.

Vitamin E
Vitamin E is a fat soluble vitamin with antioxidant properties. Naturally found in some foods and .....