Effective Use of Contraception Can Cut Teenage Pregnancy 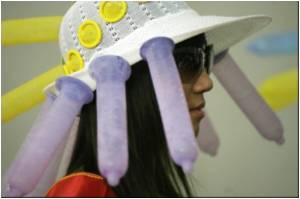 The effective use of contraception once becoming sexually active is the best way to avoid unwanted pregnancy during adolescence.

A study by the Spanish National Research Council (CSIC) and the Universidad Complutense in Madrid which additionally reveals that using no contraception or using it well after starting sexual relations increases up to six times the risk for teen pregnancy. In addition, the use of ineffective contraception (methods other than condoms, intrauterine contraceptive device [IUDs], diaphragms, or hormonal methods) quadrupled the risk.

This Interactive provides step by step visual aid showing how to correctly use condoms which can prevent transmission of HIV, other sexually transmitted diseases and pregnancy
Advertisement

These two conclusions are reflected in the study Teenage motherhood in Spain, led by CSIC researcher Margarita Delgado. Research was based on a survey conducted by the spanish Sociological Research Center on 9,700 women over the age of fifteen and even covered generations of women born before 1931. The study has been funded by the Spanish Contraception Foundation.


The research has enabled the authors to create a profile of teenage mothers in Spain: young women who become mothers early tend to emancipate and to be in romantic relationships earlier than their peers since pregnancy is a trigger for such events. Also, young mothers end their formal education earlier, start their first job later and rarely achieve stable employment.

Animation on how to use Female condom and its advantages.
Advertisement
The preliminary results of the study indicate how, in a period of 50 years, the median age of the onset of sexual relations among residents in Spain has dropped from about 25 years old to around 18.

Research shows examples of this trend: less than a quarter of Spanish women born before 1951 had sexual intercourse for the first time before turning 20 years old. In contrast, for those born between 1976 and 1980 the percentage rises to 73% and up to 86% in the case of those born between 1981 and 1985.

The gradual drop in age of the onset of sexual activity has been accompanied by a progressive decline in the age at which women begin to use contraception. Hence, while women born between 1951-1955 used contraceptive methods after turning 25 years old (and had sexual relations at 21.5), women 20 years later (1971-1975) began to use contraceptives at 19.6 years old, while becoming sexually active at 18.9.

Thus, there remains a gap between the onset of sexual activity and when contraception is used, although it's shrinking: 3.8 years difference in the case of women who were between 50 and 54 years old at the time of the survey and 0.7 years for those between 30 and 34.

The decline in age at the onset of sexual activity has been accompanied, logically, with an increase in the number of adolescent women at risk for potential pregnancy. However, when comparing each generation, there is a clear downward trend in the percentage of pregnancies among women who had sex before age 20. Thus, 60% of women born between 1941-1945 were teenage mothers, whereas among the last group analyzed (1981-1985) the statistic only reached 10.7%.

Impact of pregnancy on the life of an adolescent

"We can say that one of the biggest disadvantages for teenage mothers is the necessity to end their academic studies early," said Delgado. Although a trend can be seen even in high school, the differences are particularly noticeable when talking about college level studies.

Concerning the group of women who were between 20 and 49 years old at the time of the survey, less than 5% percent pursued a college education and the same statistic was down to even to 0% for those between 30-34 years old. By contrast, in the same age group, non teenage mothers pursued a college education at a significantly different rate: 22.6%.

As for their position within the workplace, in general, the research shows that teenage mothers, regardless of age, are working outside the home to a lesser extent than the rest of their peers. In order to reach this conclusion, the study monitored women's workplace situation for certain ages and compared the results between those groups. For example, by the age of 30 in the 1966-70 group, the percentage of sexual activity among non adolescent mothers is higher by 10 percentage points than teenage mothers.

Job instability is also a general feature: "The loss of job security is widespread among the most recent generations of women, regardless of motherhood," says the demographer. She added that the data shows the percentage of stable employment is lower among teenage mothers.

Delgado's data highlights one of the most revealing points in this regard: "We have calculated the median age at which adolescents mothers and non adolescent mothers had obtained their first stable job. To calculate this data, it is necessary that at least 50% of the observed population had a steady job at one point in time. It has only been possible to calculate the median age of adolescent mothers with stable employment for those born between 1961-1965. For the rest, it was not possible. This was due to the low number of women who had a stable job at one point (did not reach the necessary 50%), which conclusively shows the low workforce stability for teen mothers".

In general, women who were teenage mothers at the time of conception were single, lived with their parents and were not living with their partner, a situation that changes completely if one looks at the moment when the child is born. It is precisely the pregnancy that triggers the process of emancipation and becoming involved in a relationship.

Teenage mothers tend to come from households with an average number of children significantly higher than the rest of the population. Once becoming mothers themselves, they ultimately have the highest average number of children compared to others in their age category. A major difference can be seen between distinct generations of mothers with respect to the birth of their second child. For instance, taking as an example the 1951-55 population, 83.9% of young mothers had had a second child by the age of 25 and the corresponding figure for the mothers who were categorized as non adolescent mothers from the same population barely exceeded 22%.

This data contrasts with the ideal number of children wanted by those women who were interviewed. By contrast, among non-adolescent mothers, these differences are minor.

The fragility of marriage

Another dimension to the study highlights the fragility of the marriages formed by teenage mothers. "The proportion of marriage breaks-ups is similar in several generations of women, even tripling for those married during 1965-1974. The average length of marriage for young mothers shows that, in most cases, the union ends earlier than the rest of the population," said Delgado.

The increased vulnerability of unions formed by adolescent mothers is due largely to their unplanned nature. Only once finding out they are pregnant does the relationship occur and this partnership becomes the coupling of two young lives. Consequently, a major factor influencing break-ups is the probable lack of emotional maturity.

According to the researcher these new statistics confirm one of her hypotheses: the consequences of teenage motherhood can be felt throughout the woman's life, which creates more problematic situations than those experienced by their counterparts who aren't teenage mothers.

In short, teenage mothers experience in a very short period of time eight or nine important events: the start of sexual activity, the initial use of contraception, school completion, first job, emancipation from the family home, first cohabitation, first marriage, first stable job (when they are able to obtain one) and first child. Specifically, aside from obtaining a stable job, teenage mothers belonging to the 1966-1970 category experience all these events in a period of 4.8 years, compared to 9.6 years for women who become mothers after turning 20 years old.

"Motherhood in adolescence involves a striking acceleration through the various life stages especially compared to their counterparts who become mothers after their teenage years. This is also evident in most aspects of private life, such as creating a family. However, it does not reflect what happens on a more social level because young motherhood hinders integration into adult life, in particular entering the workforce ", the CSIC researcher suggests.

Interesting information about the use of birth control pills, a debate about the birth control responsibility of men and women and development of hypothetical male contraceptive pill.
Advertisement
<< Chinese Lunar Calendar Method Cannot Accurately Predict Bab...
'Good' Cholesterol May Be Bad for Certain Patients >>

More News on:
Condoms And Contraception Trimester of pregnancy Pregnancy and Exercise Pregnancy Breech Presentation and Delivery Air travel: To fly or not to fly Pregnancy and Antenatal Care AIDS and Pregnancy Teenage Birth Control Patch