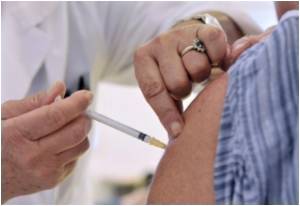 A study in the April 13 issue of JAMA, a theme issue on infectious disease and immunology says that administration of human papillomavirus (HPV) vaccine doses over a longer period of time to adolescent girls in Vietnam resulted in antibody concentration levels that were comparable to the standard vaccine schedule.

Kathleen M. Neuzil, M.D., M.P.H., of PATH, Seattle, presented the findings of the study at a JAMA media briefing at the National Press Club in Washington, D.C.

Cervical cancer is an important cause of illness and death among women throughout the world. "Each year, new cases of cervical cancer occur in approximately 529,000 women and 275,000 women die. An estimated 88 percent of deaths due to cervical cancer occur among women residing in developing countries," according to background information in the article. Human papillomaviruses are the primary cause of cervical cancer. "Combined with continued strengthening of simple evidence-based screening and treatment approaches, effective HPV vaccine programs could reduce cervical cancer rates in developing countries to the low levels currently observed in many developed countries. One challenge to broadly implementing HPV vaccination programs in developing countries will be delivering the currently recommended 3 doses of vaccine to adolescents within 6 months (dosing schedules at 0, 2, and 6 months or at 0, 1, and 6 months)," the authors write. Even in settings in which such vaccination schedules are feasible, alternative schedules may have advantages, such as lower cost (the vaccine could be delivered with other health interventions) or increased coverage (it may be easier for girls and their families or for vaccinators).


Dr. Neuzil and colleagues conducted a randomized noninferiority trial (predetermined measured outcome of intervention not worse than that of standard dosing schedule) in northwestern Vietnam to determine the immunogenicity (the ability of the vaccine to stimulate an immune response) and reactogenicity (the capacity of a vaccine to produce adverse reactions) of alternative schedules of quadrivalent HPV vaccine. The study, conducted between October 2007 and January 2010, assessed 4 schedules of an HPV vaccine delivered in 21 schools to 903 adolescent girls (ages 11-13 years at enrollment). Intramuscular injection of 3 doses of quadrivalent HPV vaccine was delivered on a standard dosing schedule (at 0, 2, and 6 months) or one of 3 alternative dosing schedules (at 0, 3, and 9 months; at 0, 6, and 12 months; or at 0,12, and 24 months). Of the 903 girls, 809 (89.6 percent) received all 3 doses of vaccine and had a serum sample available for testing after the final dose of the HPV vaccine.

Cancer is one of the frequently talked about and most feared disease that falls under the genre of lifestyle diseases that have evolved, rather rapidly, in the past two decades.
Advertisement
For all 4 vaccination schedule groups and vaccine types, the HPV geometric mean titers (GMTs; a measure of antibody concentrations) were low at the beginning of the study and increased significantly after receipt of 3 doses of the vaccine. For the intention-to-treat population and compared with the standard schedule group at 0, 2, and 6 months, the alternative schedule groups at 0, 3, and 9 months and 0, 6, and 12 months met noninferiority criteria (as gauged by level of antibody concentrations) for the anti-HPV-16 and anti-HPV-18 (HPV types) responses at 1 month after receipt of the third dose. Compared with the standard schedule group, the alternative schedule group at 0, 12, and 24 months met noninferiority criteria for HPV-18 but not for HPV-16.

The vaccine was generally well tolerated in each dosing schedule group. Pain at the injection site was the most common adverse event. No serious adverse events were found.

"The similarity of the immunogenicity and reactogenicity profiles of the HPV vaccine reported from this predominantly ethnic minority population in a low-resource area of Vietnam and other populations throughout the world is reassuring and supports more widespread introduction of the vaccine. The World Health Organization acknowledges that programmatic constraints must be considered in the decision to commence national HPV immunization programs. The option of delivering HPV vaccine on flexible schedules will allow countries to minimize costs and maximize feasibility according to local vaccination practices," the authors write.