Effect of Sleep on Childhood Obesity 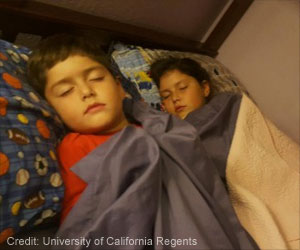 Apart from diet and exercise, poor sleep do increase the risk for obesity in children, state scientists. One in five Mexican-American children is obese, according to national statistics.

The National Institutes of Health has awarded $895,620 to Suzanna Martinez, Ph.D., assistant researcher for UC Nutrition Policy Institute (NPI) in the UC Division of Agriculture and Natural Resources, to try to answer that question.

Childhood obesity is one of the most serious health challenges in the developing countries and needs to be understood and tackled effectively.
Advertisement
‘Study examines health behaviors that link sleep to obesity in Mexican-American children.’
Tweet it Now

Studies have shown that adults who are short on sleep may experience a change in metabolism and hormones, causing the person to eat more and to be more sedentary the following day.


To explore how sleep affects child obesity, Martinez will examine social and cultural factors that may impact Mexican-American children's sleep and, in turn, how sleep affects their diet and physical activity.

Being physically very active is the mantra to prevent pediatric obesity rather than concentrating efforts at restricting energy consumption.
Advertisement
Martinez hopes to provide guidance for which behaviors to target to prevent obesity.
"Some researchers just focus on diet, some researchers just focus on physical activity, while other researchers say it's all about the environment so we have to improve the environment in terms of food environment and opportunities to be active," Martinez said. "There's very little research that tries to target all three aspects of health behavior - sleep, diet and physical activity - because there are so many factors to consider. We have to know which will make the biggest impact on obesity prevention. Is it sleep, diet or physical activity or a combination of all three?" Currently, programs are heavily focused on diet and/or physical activity.

Martinez is essentially combining three different studies into one to evaluate the context of sleep and how it impacts obesity. The five-year study will occur in two phases.

She'll begin by looking at the culture, environment and socioeconomic status of the Mexican American families to see which factors may relate to sleep duration.
For example, Martinez said, "If less acculturated Mexican-American parents have stricter or earlier bedtimes for their children, is that protective for getting optimal sleep, less protective or does it even matter?"

Living in crowded housing or in neighborhoods with high crime, homelessness and drugs can impact sleep for urban Latino families, Martinez learned from interviews with Latino parents for a study she published in 2015.

Sleep and physical activity and diet

The second phase of the study will involve evaluating the sleep duration of 40 Mexican American kids, ages 8 to 10, in the San Francisco Bay Area over two summers.
To record their sleep and physical activity, the participating kids will wear accelerometers during the day and while they sleep. The small, pedometer-like devices are worn on a belt around the hip.

In a 2014 study, Martinez found that 82 percent of Mexican-American children ages 8 to 10 obtained less than the 10 to 11 hours of sleep the National Sleep Foundation recommended before 2015. Under the network of sleep researchers' new sleep recommendation of 9 to 11 hours for this age group, 20 percent of children received less than adequate sleep.

"There needs to be more research on sleep duration before we can say, 'Sleeping this amount of time will help prevent obesity,'" Martinez said.

If her hunch is correct, promoting optimal sleep (at least 10 hours for school-age children) may be an effective way to reduce childhood obesity, and understanding the role of culture in obesity among Mexican-American children who have some of the highest rates obesity will be a key to designing effective solutions.

Research has shown that obesity contributes to numerous lifelong health problems, including heart disease, stroke, diabetes and high blood pressure. One in four overweight children become obese as an adult, and diseases like diabetes are presenting earlier than adulthood. National data show that 14 percent of white children are classified as obese, while 21 percent of Latino children are obese. With Latino children at increased risk, Martinez is committed to finding the causes of this disparity and to develop effective ways to reduce obesity among Mexican-American children.

This child obesity study is funded by a K01 Career Development Award from the National Institutes of Health National Heart, Lung and Blood Institute. Martinez has also been accepted into the K Scholars Program at UC San Francisco, which will provide her with peer support and mentorship to conduct the study.

Obesity is resistant to instant remedies and its management is a long-term endeavor. Here are a few tips to control obesity in children.
Advertisement