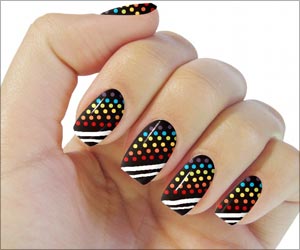 New study finds that nail salon workers exposed to potentially unsafe chemicals are at high risk of workplace health hazard. Educational outreach, change in public policy are required to help overcome these hazards for salon employees and owners. The findings of the study are published in the American Journal of Industrial Medicine.

The nail salon industry has seen rapid growth within the last 20 years, becoming increasingly popular among women of all ages who like to get their nails professionally done. For the technicians in those salons - many of whom are non-native English speakers - this beauty comes with a cost.

Advertisement
‘A new study finds that even simple protective practices could help decrease the occupational health hazard among nail salon workers. Salon owners should encourage workers to wear masks, gloves while working and take walks between clients in addition to proper handling of chemicals and using a general ventilation system.’
Read More..

Tran B. Huynh, Ph.D., an assistant professor of environmental and occupational health in the Dornsife School of Public Health, led the study to identify intervention strategies at nail salons in Philadelphia. Interviews with employees and managers/owners from different salons revealed a complex interaction between personal and environmental factors that affect health and safety practices at these salons.


Workers talked about several acute health symptoms related to chemical use, ergonomics and infectious disease hazards that they or their co-workers experienced. These included headaches; respiratory, eye, and skin irritations; and pain in the shoulders, back, and hands. Managers and owners, on the other hand, reported fewer negative health symptoms or concerns compared to the workers, attributing irritation to allergies instead.
Advertisement
The chemicals toluene, formaldehyde and dibutyl phthalate - abundantly found in nail products - have been associated with risk of reproductive and cognitive development harm, cancer, allergies, and irritation, and could affect the central nervous system. While previous studies have shown that the levels of these chemicals in nail salons are relatively low, by comparison to occupational exposure limits, the consistent reporting of acute health symptoms experienced by nail salon employees warrants intervention because nail salon employees may be at heightened risk due to working long hours at the salons.

"If we are going to change policy, it's important to engage the owners and salon employees so that the policy would not put a greater burden on these mostly immigrant-owned businesses," said Huynh.

According to Huynh, New York State recently passed strict legislation specific to nail salons that put a greater burden on the small business owners who are already trying to make ends meet. California took a different approach and established outreach programs that created a more collaborative relationship with the salon owners to incentivize them to create a healthier workplace for everyone.

"Philadelphia can learn from these two states," said Huynh. "I have been working with the Philadelphia Air Management Services on indoor quality issues at salons and finding a balanced policy has not been easy."

But even simple protective practices could go a long way, according to the researchers. Salon owners should encourage employees to wear masks and gloves and take walks between clients in addition to proper handling of chemicals and using a general ventilation system.

While conducting the study, the researchers found that while some basic knowledge about the hazards and control measures were generally known among the employees, misconceptions about certain health and safety practices also existed. These included but weren't limited to, the use of surgical masks for dust and chemical protection or the belief that muscular pain is mostly due to aging.

"Some of these misunderstandings were consistent with reports of nail salon practices from other states which may indicate information and training gaps persist not only in Philadelphia but potentially among the larger nail salon industry," the researchers wrote.

According to the study, several workplace environmental factors play a significant role in shaping nail salon safety practices. Different owners have different management styles and organizational policy within their salons that can affect technicians' behavior. Clients can also positively or negatively influence a salon's practices. However, both owners and technicians are generally responsive to external requirements and law enforcement.

The researchers focused on Vietnamese nail technicians and owners because the majority are of Vietnamese origin, but future studies will focus on other immigrant groups working in the nail salon industry. They are in the process of determining an intervention and outreach program to Vietnamese nail salon employees.

"Once we have determined that our intervention/outreach program is effective, we can translate the materials into more languages and work with more ethnic groups," said Huynh.

Source: Eurekalert
Advertisement
<< Some Cannabinoid Compounds May Have the Potential to Inhibit...
Early Life Exposure to Chemicals Reduces Lung Function in Ki... >>

France Approves Ban on Advertising for Artificial Tanning Beds, Salons
Tanning-induced melanoma is the second-fastest-growing form of cancer after lung cancer among ......

NSW Bans Tanning Salons from 2014
New South Wales will be the only place in the world besides Brazil to issue a total ban on ......

Love Going to Salons Or A Spa? Like Adventure? Want To Experiment With Beauty? Try These Bizarre Treatments
For a women, her appearance is of utmost importance, most of the time. So it is no surprise that ......

Ingrown Toe Nails
An ingrown toenail or onychocryptosis, is a common condition affecting toe nails. It is commonly see...