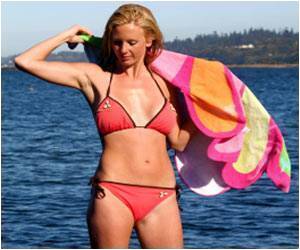 While fighting fatigue and jellyfish stings on her fourth attempt to cross the Florida Straits from Cuba without a shark cage, Veteran US athlete Diana Nyad edged toward Florida.

After 28 hours in the water, the 62-year-old has covered about a third of 103-mile (166-kilometer) distance and the 50-member crew accompanying her said she was "very comfortable and confident."

The weather was also cooperating.


"Today was an awesome day," support team operations chief Mark Sollinger told reporters. "The sea layed down, it was flat, flat, flat, it was a classic day."

Swimming, BMWs and Touring France are in With Chinas Rich

An annual survey released on Thursday has claimed that Swimming, driving BMW cars and holidaying in France are the top favorite lifestyle choices for China's wealthiest people.
Advertisement
Nyad was swimming steadily at 50 strokes per minute despite painful jellyfish stings on her lips, forehead, hands and neck, the team said in updates to fans via social media.

The athlete and author took to the water in Havana on Saturday and aims to make land at the Florida Keys on Tuesday after about 60 hours in the water.

She is on her fourth attempt to cross the strait separating the two countries, which have been at odds for over five decades. The last was in September, when jellyfish stings forced her to give up after about 40 hours.

A video posted on YouTube showed her singing tunes from The Beatles as she sipped water. "There's no stopping her now," the crew said.

Nyad's first attempt to make the crossing was in 1978, when she was 28 years old.

Shoulder pain, asthma and ocean swells forced her to cut short another attempt in August 2011.

This time, the long-distance swimmer has a specially designed bodysuit to protect her against jellyfish that she wears at night, when the creatures are most active.

The suit did not, however, prevent all stings, including by dangerous box jellyfish.

Nyad used backstroke at night to keep her face out of the water and avoid being stung, said the crew, which works from five yachts and includes divers with shark experience as well as jellyfish experts.

She returned to freestyle swimming after dawn.

The swimmer comes up to her Voyager escort boat, which she is not allowed to touch, around every 90 minutes to fuel up, sipping on a concoction of nutrients, electrolytes and calories through a Camelbak hydration pack.

Despite fatigue, she has not lost her appetite. In one of the meals, she had pasta and hot chocolate, the crew said. At other times, she has a spoonful of peanut butter, pasta or a bite of bread.

Stressing the immensity of the challenge, her team tweeted: "This swim is five English Channels, with sharks and box jellies added."

At night, the accompanying boats and kayaks use only red lights because marine biologists say white lights could attract jellyfish.

Nyad, who turns 63 on Wednesday, set an open sea record for both men and women by swimming from the Bahamas to the Florida Keys in 1979 -- a journey that is the same distance as the Cuba-Florida swim, but a feat she has described as far less dangerous.

And she set a record for circling the island of Manhattan at age 50, clocking in at seven hours and 57 minutes.

In July, British-Australian athlete Penny Palfrey, 49, failed to swim unassisted from Cuba to Florida and had to be plucked from the sea after nearly 42 hours in the water when she could no longer cope with a strong current.

Whether having fun, staying in shape or pushing your physical capacity to the extreme, the summer is a great time to enjoy your physical health and move more.
Advertisement
<< 'DNA Wires' Could Help Physicians Diagnose Disease: Scienti...
Experts: World Must Brace for Higher Food Prices >>

Diet and Nutrition Tips for Athletes
News Archive
News Resource
News Category
How to Reduce Needle Anxiety in Children? Tobacco Addiction: Here's How to Break the Habit Parents are 'Winging It' on Their Kids' Mobile Use Ankle and Ankle Movements While Riding an Hoverboard Is It Healthy to Let Your Mind Wander?
More News
Sign up for Wellness Consult a Doctor Sign up for Selfcare

More News on:
Diet and Nutrition Tips for Athletes