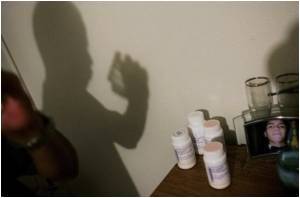 Ecstasy may prove useful to distressed victims of post-traumatic stress in overcoming their demons, research has revealed.

During a test, scientists found dramatic effect on previously untreatable patients who had suffered post-traumatic stress disorder (PTSD) for more than 19 years.

Doctors in the United States held two eight-hour psychotherapy sessions three to five weeks apart for the patients, during which they administered the ecstasy chemical MDMA.


Two months later, 80 percent of those treated no longer had symptoms that met the medical definition of PTSD.

Ten of the 12 patients given ecstasy responded to the treatment, said the researchers.

Valuable tips to keep yourself cool in adverse situations
Advertisement
By contrast, only two out of eight patients offered a "dummy" placebo showed an improvement.

Three individuals so badly affected by their condition that they could not hold down a job were able to return to work.

"This pilot study demonstrates that MDMA-assisted psychotherapy with close follow-up monitoring and support can be used with acceptable and short-lived side effects in a carefully screened group of subjects with chronic, treatment-resistant PTSD," Scotsman quoted researchers as saying.

"In this group, MDMA-assisted psychotherapy produced clinically and statistically significant improvements in PTSD symptoms," they added.

The scientists have now got a go-ahead from the US regulatory body, the Food and Drug Administration, to carry out a bigger study on ex-soldiers traumatized by their experiences in Iraq, Afghanistan and Vietnam.

The findings were published in the Journal of Psychopharmacology.

Today most of us are under stressful situations which is hard to avoid.Explore our simple and inexpensive stress relief tips.
Advertisement
Advertisement

Drug detoxification (or drug detox) is a process that helps drug addicts to give up drugs with less or no ...
This site uses cookies to deliver our services.By using our site, you acknowledge that you have read and understand our Cookie Policy, Privacy Policy, and our Terms of Use  Ok, Got it. Close
×