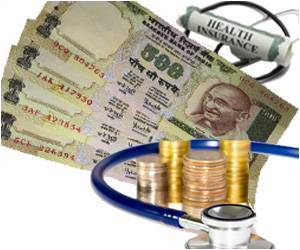 The economic slowdown and a lack of government driven plans in India have arrested the growth of health insurance premiums by 25 percent during the fiscal 2011-12.

In sharp contrast, the last fiscal 2010-11, registered a growth of 35 percent in premiums, amounting to an estimated total of Rs 13,000 crore, says a report by hindustantimes.com.

Oz PM Julia Gillard is confident on getting legislation through federal parliament on the issue of discounted private health insurance for wealthier Australians.
Advertisement

The loss on premium growth can still be minimized, say health insurance companies, as they are hoping that consumers would buy their products to save taxes.


There is still a month to go for the current fiscal year to close.

According to the Federation of Indian Chambers of Commerce and Industry (FICCI) less than 15 percent of the population is under health insurance cover of any kind. In a health insurance meet last year, FICCI said, 'efficient and effective health insurance delivery has always been a challenge in evolving markets.'

Many US insurers stopped offering individual coverage for children after the 2010 health care overhaul as no child could be refused on the grounds of pre-existing diseases.
Advertisement
A National Sample Survey Organisation data suggests that about 65 percent of the country's poor get into debt and 1 percent fall below the poverty level each year because of the health issues.

About Rs 6,000 crore worth of health insurance business in the country is managed by Insurers from the public sector  National Insurance Company, New India Assurance, Oriental Insurance and United India Insurance.

Sanatogen Noscaphene (Noscapine) How to Reduce School Bag Weight - Simple Tips Nutam (400mg) (Piracetam) Drug Interaction Checker Accident and Trauma Care The Essence of Yoga Selfie Addiction Calculator Blood - Sugar Chart Indian Medical Journals
This site uses cookies to deliver our services. By using our site, you acknowledge that you have read and understand our Cookie Policy, Privacy Policy, and our Terms of Use