E.Coli Bacteria Could Soon be a Diagnostic Tool for Detecting Cancer and Diabetes

Two separate research teams at the Massachusetts Institute of Technology (MIT) and the University of California at San Diego revealed that they have used Escherichia coli (E. coli) as a diagnostic tool to detect liver cancer and diabetes respectively. The researchers used a harmless strain of E. coli called Nissle 1917, which is marketed as a promoter of gastrointestinal health.

The researchers at MIT engineered the E.coli bacteria to produce a luminescent signal when they encounter a tumor, which will then be detected with a simple urine test. The researchers found that when fed to mice by mouth, the bacteria do not accumulate in tumors all over the body, but predictably zero in on liver tumors. That's because the hepatic portal vein carries the bacteria from the digestive tract to the liver.

The researchers said, "The animals that were given the engineered bacteria did not exhibit any harmful side effects. With the E. coli test we were able to detect liver tumors larger than about one cubic millimeter, offering more sensitivity than existing imaging methods."


Study author Sangeeta Bhatia, a professor of health sciences and electrical engineering and computer science at the MIT said, "This kind of diagnostic could be most useful for monitoring patients after they have had a colon tumor removed because they are at risk for recurrence in the liver."

In the second study, researchers at the University of California at San Diego engineered E. coli to detect biological signals in urine and, at a specific threshold, generate a visible color change. They demonstrated their so-called bactosensors in urine samples from diabetic patients and found that they accurately and reliably detected abnormal glucose levels in urine, performing almost as well as current standard urine dipsticks.

Both papers were published in the Science Translational Medicine. 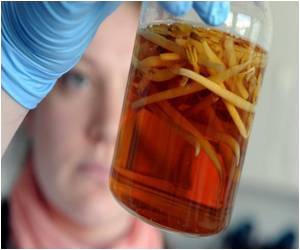 New Study Helps Scientists Understand How E. Coli Clone Has Become Globally Distributed
Scientists have come closer to the understanding of how a E. coli clone described as the most important of its kind to cause human infections, has spread across the world in a very short time.
READ MORE