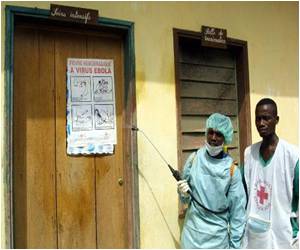 A second death from the Ebola virus has been confirmed in Sierra Leone, and the WHO has warned of possible further contagion.

"One of the seven Ebola patients, a woman admitted at the Isolation Centre in the Government Hospital in Kenema, died on Tuesday," Dr Brima Kargbo, the chief medical officer, told AFP in a telephone interview.


The announcement of the death comes two days after Sierra Leone confirmed its first fatality from Ebola.

The WHO meanwhile warned of likely further contagion as four of the sick patients had been moved back to their home village.

Vaccination against Ebola has been proved safe and capable of producing a robust immune response in chimpanzees, the first conservation-specific vaccine trial on captive chimpanzees.
Advertisement
They were removed from an isolation facility in the east of the country by family members who were unwilling to see them remain in a hospital far from home, WHO scientist Pierre Fromenty told reporters in Geneva.

"Of course by doing that, they exposed themselves, they exposed the villages," he said, adding that the Ebola patients were still in Kuindu village, near the border with Guinea, the epicentre of the West African outbreak.

The WHO has described the region's first Ebola outbreak as one of the most challenging since the virus was first identified in 1976 in what is now the Democratic Republic of Congo.

In response to the epidemic, Sierra Leone has restricted travel in some areas, and reaffirmed an earlier ban on trips to attend funerals in Guinea.

Authorities have designated the eastern regions of Kailahun, where the first case was confirmed, and Kenema as "high risk".

Officials are trying to encourage residents to cooperate with health workers, but Fromenty said getting populations in both Sierra Leone and Guinea onboard with efforts to rein in the epidemic remained a major challenge.

"The lack of collaboration with some affected families has allowed this epidemic to continue to spread invisibly between family members," he said, insisting on the need to work harder to explain the benefit of isolating the sick.

The haemorrhagic fever, which has no cure, erupted in Guinea in January and also spread to Liberia.

In Guinea, 281 cases of viral haemorrhagic fever have so far been reported -- 160 of them confirmed by laboratory tests -- resulting in a total of 185 deaths, WHO said Wednesday.

Liberia meanwhile has seen 12 reported cases of Ebola -- six of them laboratory confirmed -- including nine deaths, but no new cases have emerged since April 9.

However, Fromenty pointed to the fluid borders between Liberia, Guinea and Sierra Leone and said: "We're on high alert in Liberia."

Ebola is one of a handful of similar fevers that cause vomiting, diarrhoea, muscle pain, and in severe cases, organ failure and unstoppable internal bleeding.

It can be transmitted by blood and other bodily fluids, as well as the handling of contaminated corpses or infected animals.